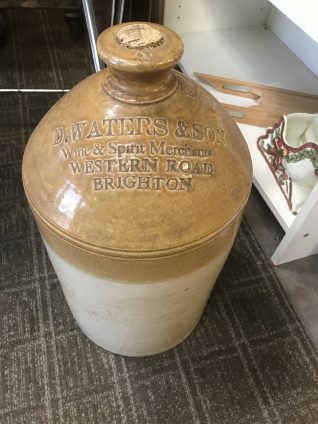 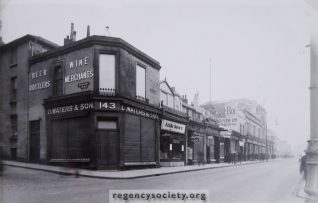 zoom
This block comprised Nos. 143 to 156, Western Road. It consisted of several small shops, and one large store, the Bon Marché premises. At this time, this was occupied temporarily by Boots, whose own building in the next block was undergoing reconstruction.
James Gray: The Regency Society

We were sent the accompanying image here by Frank Marcheski who wanted to know anything we could tell him about it. In fact, until 1864 the address on the stone jar, 143 Western Road, was a private residence. which was converted into a china and glass dealer.

D. Waters, in turn, established the premises as a Wine Merchant. until 1954 and it was during their tenure that the shop was rebuilt in the early 1930s as a part of the Western Road road widening scheme.