You are here: HomenextPeoplenextMy Brighton and Hove LifenextLife up the GrovenextHigh days and holidays, 1930s 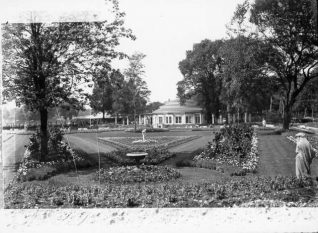 Rita Denman spent her childhood in Elm Grove in the 1930s. This is one in a series of memoirs she has sent to My Brighton and Hove titled ‘Life up the Grove’.

In the 1930’s the average man’s wage was very low and did not allow for extravagances. Cars were owned by the ‘better off’ and holidays abroad for the masses were far into the future. Many family holidays consisted of days out, and everyone including the children, was used to walking long distances.

A walk to Withdean
A favourite walk was to Withdean. The high point was the walk down Peacock Lane to a dairy on Preston Road, where we were indulged in a glass of milk. It was always exciting to watch the Salvation Army band march from Congress Hall near the level to Preston Park. Many townsfolk fell in behind, marching to the park to listen to the ensuing brass band concert.

Preston Park
Preston Park was very popular, with space to play games, and the rose gardens and the stepping stones across the pond to enjoy. The competition gardens on the Preston Road side were duly examined and admired. The folk playing bowls in their whites and Panama hats seemed to be from another world and the tea-rooms always busy with the inviting clink of china was part of the atmosphere of the park. School sports were held at the sports ground at the north end of the park. When the Rockery was constructed on the opposite side of Preston Road, this also became an amenity accessible to many families.

Over the hill to Telscombe
We always did things as a family. We would walk over the hill to Telscombe or in the other direction towards Bear Road, through Tenantry Down Road, where the allotments were, skirting ‘the Sanny’ (Sanatorium and later Bevendean Hospital) to the steps through more allotments down into Lower Bevendean. Then we crossed the valley and went up the other side to Higher Bevendean, where an Aunt and Uncle lived. The hill behind Bevendean Crescent was a nature lover’s delight, where a carpet of chalk loving wild flowers grew. The hill ran down into open pasture where cows grazed. Is it still there as beautiful as ever? I remember the cows well, as on one occasion when wearing my new pink knitted coat, I started to run down the hill. Gathering momentum as I ran, I was soon completely out of control and ended up in a heap amidst the cows. Luckily for me not in a cow pat!

Walking along the seafront
We often walked along the seafront. We watched the sea in all its moods, summer and winter. We risked being blown over by the cross-winds on the corner of East Street and got wet on rainy bank holidays. We gingerly walked over the pebbles to get to the sand when the tide was ‘out’ and dug holes in the shingle to see how far down it was wet when the tide was ‘in’. We tried to enjoy our sandwiches, which invariably got sand in them, and we sheltered under a fishing boat when it was windy, determined to enjoy ourselves.

Uncle Jack at Black Rock
At the Black Rock end, Jack Shepherd gave his seaside entertainment. A large striped tent and awning covered the stage. I suppose there must have been paying patrons, but large crowds gathered to watch on the Upper levels of Madeira Drive for a free show. Not to be outdone, at intervals a collection bag on a very long pole was hoisted up into the crowds, which at this point melted away.

Our favourite place was at Black Rock among the rock pools. It was sometimes very smelly, but there were always hordes of children with little nets prodding about in the pools. There were all kinds of little crabs, starfish, sea anemones, mussels and various kinds of seaweed, and usually a nice piece of ribbon seaweed to take home as a weather forecaster which was hung in the garden. If the seaweed was damp it would rain and if it was dry the weather would be fine. We must have learned a great deal about marine life without realising it. What a great pity it was that this natural centre of learning was swallowed up by the marina!

A trip on a paddle steamer
A big event in our holiday was a trip on the paddle steamer that I believe was ‘The Waverley’, to the Isle of Wight leaving from The Palace Pier. It must have been 1937 when the Coronation Naval Review was being held at Spithead that we took an annual trip. There was a very thick sea fog and the siren was being sounded every few minutes, answering sirens being heard in return. Whether or not we were ”off course’ I don’t know but suddenly we were in the path of a naval ship narrowly missing a collision. The sailors on deck all cheered as we avoided disaster. There was no radar at that time of course. It was with some relief that we set foot on the Island.