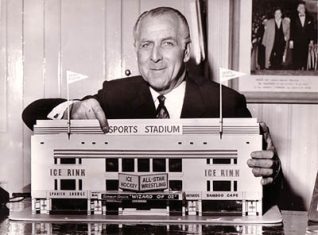 Benny Lee will be best remembered as Brighton’s premier sporting entrepreneur and showman. His reputation rests almost entirely on the time he ran the Sports Stadium in Brighton and made it the premier ice hockey town in England.

He was born in Notting Hill, the son of Harry Lee, who promoted boxing at the Royal Albert Hall. His elder brother Harry was a speed skater and his younger brother, Sydney, was billiards and snooker champion of Great Britain. Benny’s sporting talents were apparent from the start, as he followed in his brother’s footsteps by taking up roller-skating.

Champion roller skater and ice skater
In 1927 he became the amateur half-mile speed roller skating champion and later became the half-mile champion of the world. In 1928 he won the European championship at the Ville de Vere Stadium in Paris. One of Benny’s more unusual feats was the time he roller-skated from Hyde Park, London, to Brighton. He covered the distance in exactly four hours, an amazing feat even by today’s standards, but particularly remarkable considering the state of the roads in 1927.

His next career move was to apply for the position of ice skating instructor and floor manager at Streatham Ice Rink. This was a bold move, considering that at the time he couldn’t skate on ice! This minor hiccup was soon put right as he went on to win the London professional ice championship. He finally became General Manager in 1938. After his demob from the RAF he returned to the rink to continue the job of getting the rink back into shape after the war.

In the forthcoming years the rich and famous beat a path to the stadium’s door and Benny Lee was always there to greet them. Always immaculately dressed in his mohair dinner suit, and never without a Havana cigar, his famous trademark, Benny epitomised the “Beau Brummel” image of the best-dressed man in a town of well-dressed men. His wife Gola was never far from his side, every inch the perfect hostess.

The S.S., as it was known locally, was the Mecca for sport and entertainment in the South of England. The 4,000-seater stadium was packed for years as the great “Brighton Tigers” won every accolade there was to win in the field of ice hockey. Spectator violence was unknown, the only aggression coming from the competing teams on the ice. Benny’s talent and entrepreneurial skills had turned the rink into one of the most famous venues in England. His talent for recognising what the public wanted has never been repeated by anyone else in the town to this day.

Even after the rink closed in 1965, Benny Lee’s determination to succeed never dimmed. His legacy to the town was his ability to promote Brighton as one of the great sporting towns in Britain. At the age of 86 his days of showmanship finally came to an end. His likes are sadly missing from the town today!