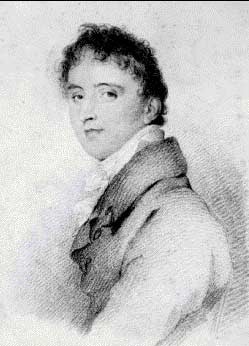 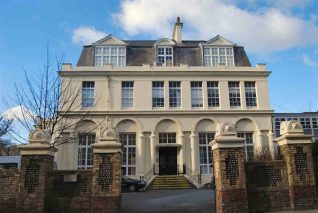 This important local figure was born on 23 December 1782 at Lewes, the son of Thomas Kemp who, in 1774, was left a moiety of the manor of Brighton by his uncle, Thomas Friend. Kemp’s farmhouse was rented by the Prince of Wales in 1786, and was later demolished when the Marine Pavilion was erected {3}.
T.R.Kemp graduated in theology at Cambridge in 1805, and married Frances Baring in 1806 by whom he had four sons and six daughters, but she died in childbirth in 1825 and is buried in St Nicholas’s Church. In 1811 he succeeded to his late father’s moiety of the manor, and also became Member of Parliament for Lewes when he won his father’s former seat. In March 1816 however, he resigned his seat and founded a dissenting religious sect at St James’s Chapel, Brighton, which moved the following year to his newly-built Trinity Chapel in Ship Street ; Kemp preached there for six years.
The Kemps lived at Herstmonceux Place from 1807 until 1819, but in that year they moved to a new house known as the Temple off Montpelier Road . By 1823 Kemp had returned to the established church, and also to Parliament as Member firstly for Arundel and then for Lewes again in 1826-37. It was in 1823 that he conceived the idea of the fashionable estate east of Brighton that was to bear his name, principally as a speculation to improve his finances. The project was not initially successful though, and as Kemp fell into greater financial difficulty he was forced to convey about £10,000 worth of land to the west of the estate to builder Thomas Cubitt in lieu of payment. He sold Trinity Chapel in 1825, but then purchased much of the Wick estate in Hove which he resold to Isaac Goldsmid in 1830.
Kemp was very prominent in local affairs as he was lord of the manor (and therefore a large property owner), an ex-officio town commissioner until 1825, a trustee of the Steine, and a magistrate; his generosity in gifts of land for worthy causes such as schools and hospitals is particularly noteworthy. In October 1827 he moved to 22 Sussex Square, and in 1832 married Frances Harvey by whom he had a son, Frederick, who was eventually to inherit his moeity of the manor and the freehold of the Kemp Town enclosures. In 1834 Kemp had a house completed at 24 Belgrave Square, London, but just three years later he was forced to leave England in order to escape his creditors; he returned only once, in September 1840. In January 1842 much of his land was auctioned, and on 10 January 1844 a proclamation of outlawry against Kemp was pinned on the door of St Peter’s Church following his failure to surrender to a suit brought by Sir William Pilkington.
Thomas Read Kemp died on 20 December 1844 at 64 Rue de Fauborg Saint-Honore in Paris, and is buried at Pere-la-Chaise cemetery in that city. A tablet was erected to his memory at St Nicholas’s Church by his widow.