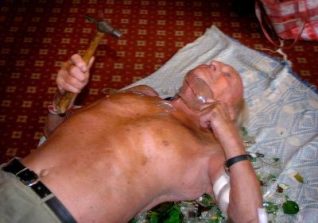 zoom
The Great Omani
The Argus:

A cheery looking woman with a wild thatch of blonde hair appeared in the pub doorway and waved at the guest of honour. “Sorry I can’t stay to watch you lie on a bed of glass, but I’ve got a sick pigeon down my bra,” she warbled. Everyone nodded in sympathy, after all this was nothing unusual on a Saturday morning in Brighton.

90th birthday party
But if nursing sick pigeons is an average activity in the city, the events of this Saturday were – even by Brighton standards – slightly special. An excited crowd had gathered in the Bedford Tavern to witness a little bit of history. The Great Omani – otherwise known as Ron Cunningham – had summoned friends, family and the press to witness his farewell performance. On the occasion of his 90th birthday, the world’s oldest stunt man was preparing to astound his audience for the very last time.

Magic Grandad’s sense of the spectacular
Like a king upon his throne, the diminuative guest of honour had been installed in a wooden armed chair on a red plush cushion. Surrounding him nestled his court of nubile young Brazilian girls, laughing and kissing everybody in a very un-English fashion, they formed an adoring inner circle. At the next table the family gathered, children, grandchildren and great grandchildren gossiped together with a subdued air of occasion. The observer was quickly aware however that while they were here to celebrate a special day, they had, over the years, become used to Magic Grandad’s sense of the spectacular – they had seen it all before. More wellwishers arrived bearing birthday cards and bottles of whiskey and were duly greeted with wild enthusiasm by the great man and kissed on both cheeks by the Brazilians.

The press arrive
The pigeon lady, with her lop-sided bosom, had scuttled away, but in her place arrived the press photographer. He was instantly recognisable, not for the camera bag slung over his shoulder which was at first hidden by the thick wooden doorpost, but rather for his air of unflappable patience and his multi-pocketed jacket. Such a garment is the stock in trade of the press photographer who may need to rapidly lay hands on film, lens cap, notebook and other pocket sized tools of the trade at a moment’s notice and often in a severly confined space. “Aha the press have arrived,” beamed the showman hopping up to greet the photographer and thus adding an extra frisson of expectation to the crowded bar. He made no obvious move to begin the show, however, for with over 60 years of performance under his belt The Great Omani knows how to work an audience and build them to a pitch of excited anticipation before the show begins.

The scene is prepared
More friends and family arrived, including a very large brown dog belonging to Ron’s son and an extremely new baby belonging somewhere on the family tree. Finally the moment arrived. “Let’s do it” he declared scuttling off to prepare himself with an energy and enthusiasm which would have done credit to a man half his age. The space was prepared, onlookers squashed back around the walls allowing a cloth to be laid in the middle of the carpet, on to which was poured a suitcase full of broken glass.

The Great Omani re-appeared, minus shirt, shoes and socks. Everyone cheered.

Finally the action begins
“This time last year I was the fittest man in Sussex,” he proclaimed. And though that might seem an idle boast for man completing eight decades of life, in fact nobody doubted him for one moment. Despite the ravages of recent health problems his bronzed body bore all the signs of having been extremely well looked after. Anyway by then he had been chattering non stop for over an hour and everyone had heard the highlights of his remarkable life several times over. Twinkle eyed patter created the big build up, and finally the action began.

Crushing glass with bare feet
Clinging on to his young pal Jo for support he lifted one bare foot and brought it down hard on the pile of glass, then stepping up with both feet he began grinding broken bottles beneath his soles. The audience gasped and cheered and applauded, encouraging The Great Omani to totter off his glass mountain and re-mount for yet more glass grinding. Having worn the glass down to a coarse bed, he then lowered himself on to the floor and lay back, inviting a small great grandchild to stand on his chest.

Cracking gags and flashing fire
Still cracking jokes, he produced some metal rods with cotton wool ends soaked in lighter fuel. These he set light to and passed, in true showman’s style, across his bare chest. Everyone knew he had been doing this trick for years and wouldn’t actually damage his skin, but some were a little concerned for the sticking plasters on his arms which seemed in real danger of bursting into flames. The nurse who had applied them after his hospital blood tests obviously didn’t realise the severe trauma these NHS bandages were destined to undergo.

Impressive fire eating
After some impressive fire eating, next came the bendy bladed knife which, with an appropriate build up for the audience and a final flourish, he plunged first into his chest and then into his chin. The Brazilians gasped and clutched each other, torn between amusement and wide eyed horror. Even the English people roared and cheered and applauded in enthusiastic abandonment.

The final stunt
And then the final stunt – the last performance ever – the farewell to a life’s work. Hammer in hand The Great Omani placed a beer glass under his chin and, still reclining on his bed of broken glass, smashed it to pieces. The crowd went wild.  Finally all that was left was one last telling of the infamous chicken joke. And that was it. Ron returned to his seat at the bar, the Brazilians crowded around laughing and kissing everyone again, the family began to think about lunch.

Still a trick or two to come?
Time takes its toll on everyone, even a man bursting with life and energy must one day inevitably succumb to the greatest stunt of all. But despite his weakened limbs and his ninety years, and even despite this high profile final performance, somehow one is left thinking the old showman might still have a trick or two up his shirtsleeves before they finally ring down the curtain.