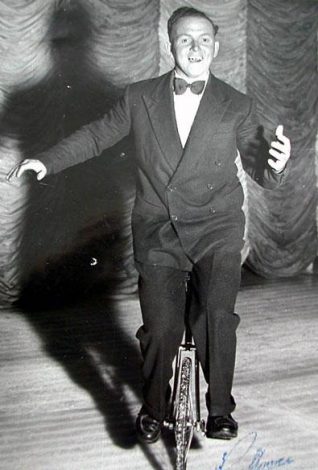 Reg Moores was a talented entertainer and inventor who worked best in front of a live audience. On leaving the RAF, Reg took up professional ice skating and was soon a popular figure in the many ice shows produced at the Sports Stadium, Brighton.

Before radio mikes, skaters had to mime
In the early ice shows, the cast members had to mime the words and songs as modern day radio microphone transmission technology was not available. The dialogue was transmitted to the “Tannoy” system by a team of actors, hidden behind a screen, who would secretly perform the voice parts of the stars on ice.

Pioneered radio microphones
A keen electronics enthusiast, Reg pioneered one of the first radio microphones in the country to be used in the 1949 production of Tom Arnold’s ice show “Aladdin”. The radio microphone allowed the stars of the show not only skate, but also to sing and act the part in full.

The voice often didn’t match the face
Unfortunately, as in the silent movie era when stars of the silent screen went over to talkies, the voice often didn’t match the face! A similar thing happened with ice skaters! With very complicated jumps, turns and physically demanding roles, the skaters were often out of breath and unable to deliver their lines! As a result, the radio microphone was consigned to the back room and was not to appear for many years in its current form.

Reg’s prototype in the Science Museum
Reg never patented the idea because at the time he was using radio frequencies illegally. The Sports Stadium, built of ferro-concrete and steel, contained the illegal broadcasts within the building! The original prototype is on display at the Science Museum in London.

Multi-talented entertainer
A popular multi-talented entertainer Reg had the ability to turn his hand to anything and his range was astounding! Not only was he a speed skating champion he could stilt skate, juggle, barrel jump, unicycle and on top of this performed as a fire eater in many of the shows, just to mention a few of his talents!

Still entertaining people in 2005 he is currently a member of the “Magic Circle” and won the accolade of European Whistling Champion in 1996.