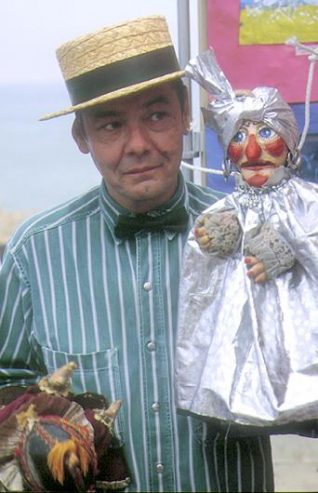 Mike Stone was Britain’s longest serving Punch and Judy man. He died in April 2005, aged 54. Below we publish a tribute to him by David Gray, who has published a whole set of photos of Sergeant Stone on his website at www.imagesbrighton.com. Mike Stone created his own personal tour of Brighton for ‘My Brighton’ in 1994.

A thirty year career
Mike Stone was Brighton’s Punch & Judy man for thirty years. Last week, at the sadly young age of 54, he died. This picture is one of a set of pictures at www.imagesbrighton.com that remembers him and his stage persona, Sergeant Stone.

An outrageous but lovable character
Well known is the story of the grateful mums who, after one of his seafront shows, went to the back of his box to congratulate him and found the celebrated puppeteer welcoming but also completely naked. There was also his outrageous adult version of his show and a particularly alarming personal appearance at Glyndebourne. But he had a wonderful range of stories of his own and he knew and loved Brighton with a passion.

Fun and pleasure more important than wealth
His 25th anniversary as Brighton’s Mr Punch was marked by a party on the seafront. It rained cats and dogs, everything was soaking wet, even the sausages, but absolutely everyone, including himself, had a marvellous time. If, as it should be, giving fun and pleasure is more important than wealth and respectability, Mike Stone’s life was a tremendous success.