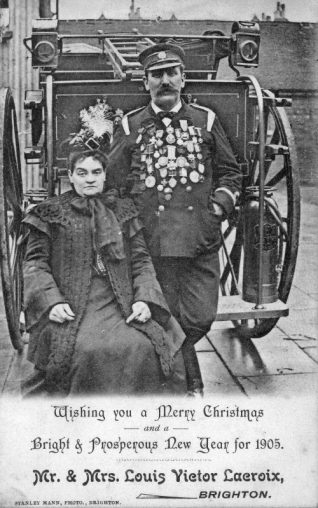 zoom
Inspector Louis Victor La Croix, of the Brighton Police Fire-Brigade and his wife
From the private collection of Councillor Geoffrey Wells

In the late 19th century, the police turned out with the town’s fires as well as the volunteer brigade and the fire establishment, but after a serious fire in Queen’s Road in 1880, an official police fire-brigade was formed at the Town Hall in 1881 under Superintendent Thomas Gibbs.

Following several bad fires over a number of years, the brigade was reorganised under Inspector Louis Victor La Croix, formerly of the volunteer brigade, who remained in charge until 1921. (La Croix was, incidentally, the first holder of the mayoral car number plate, CD 1.)

Click on the photograph to open a larger version in a new window.