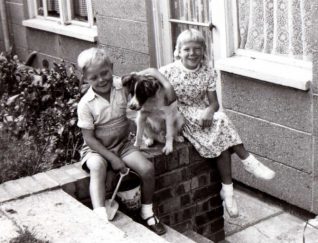 Me with my brother and our dog Bimbo

I went to Lower Bevendean Infants School; I believe the headmistress at that time was Miss Cross. As I stood in the playground I could look down into the farm. I have a memory of seeing a lady feeding the chickens. My childhood was carefree at Lower Bevendean; we happily roamed the fields with our dog Bimbo. We eventually moved from Lower Bevendean as my mother found it too isolated, to Clayton Road. 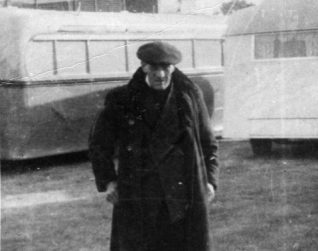 Memories of my granddad

At the age five or six, I had some kind of breakdown as my granddad, Big Bill Taylor, a fisherman had died. I have wonderful memories of him. I remember him cutting the clothes line down at his home in Holland Street, for my sisters and me to use the rope to skip. I also remember he had a tin box, I think it was an old Elastoplast tin, full of Dolly Mixture sweets that he would share amongst us.

Another memory I have is of going to Milner flats to an aunt, and collecting a very large flower arrangement of a boat, as he had been a fisherman, for granddad’s funeral. I also remember going with my mum to see my granddad when he was laid out in the funeral parlour in Lewes Road. That memory is very vivid; I think my mum took me along because she didn’t think I was aware of what had happened, but clearly I was. 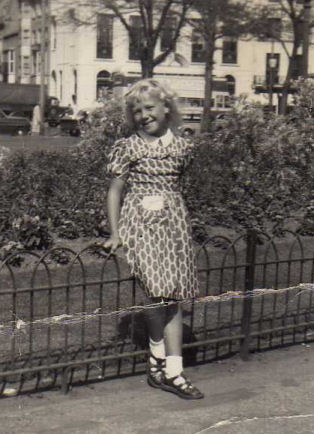 Me aged about 9 years old

After leaving Lower Bevendean Infants School I attended Fairlight School Juniors and then to Fairlight Senior Girls, before it merged with Elm Grove School in the sixties. In 1966 I contracted glandular fever, and spent some in the Foredown Isolation Hospital. When I left school I worked at Western Road Woolworth’s store, British Home Stores, and then finally settled at Paragons Photographic in West Street.

A full and happy life

In 1971 I married Michael Tonks from Leybourne Road and we had two children, Paul and Caroline. Sadly my husband died unexpectedly in January 2004. But I have had a full and happy life. I still have contact with friends from the old days, and we meet for lunch every so often. If you can remember me, or my family, please do leave a comment below.