One of those places you never forget

The Lewes Road Congregatonal Church Hall was one of those places never to forget. I remember it from the time we used to stage our pantomimes there. There were lovely old wood floors everywhere. We had end of season parties in the stage hall with questionnaires all around the walls. There were lots of ridiculous team games and plenty of dancing. Ballroom of course! We are still in the 50’s and early 60’s here.

Adjacent to the stage hall was the canteen with it’s big urn for brewing large amounts of water for teas. Extra padded doors were added to the canteen hatch-way whilst we were brewing up teas when shows were on. I can remember whispering all the time and moving the crockery and cutlery around carefully and quietly. I also helped out in the kitchen on rehearsal nights for the Gilbert & Sullivan singers. Teas with cucumber, cress or egg sandwiches were served at 9 pm precisely. They all would thunder down the wooden stairs thirsty after all that singing.

Full of memories and sounds

Something like one shilling and sixpence covered tea and a sandwich, and it was dropped into a little white pot. Then the company resumed rehearsals, also on the top floor school room, till 10pm when lights were dimmed, and flashed, to let us all know time was up and the caretaker wished to lock up go home on time.Percy was the caretaker’s name. I believe he lived just round the corner in upper Lewes Road so he had not far to walk. The dark walls and corridors of the church hall were full of memories and sounds of all kinds even though no-one was there. This was alright in the light summer nights but dark winter evenings it could be spooky.

For the pantomimes Florrie Richardson was our producer. A very sweet shy lady who I am sure had quite a job each year putting us though our paces. We rehearsed in one of the school rooms up on the top floor above the big hall at the front of the building. I feel certain Florrie had an assistant but I can’t recall who that was. Neither can I remember who played piano for us and all those lovely songs from the West End shows. It always seemed to come right on the night. Thank you, Florrie.
Click on the photographs to open a large version in a new window 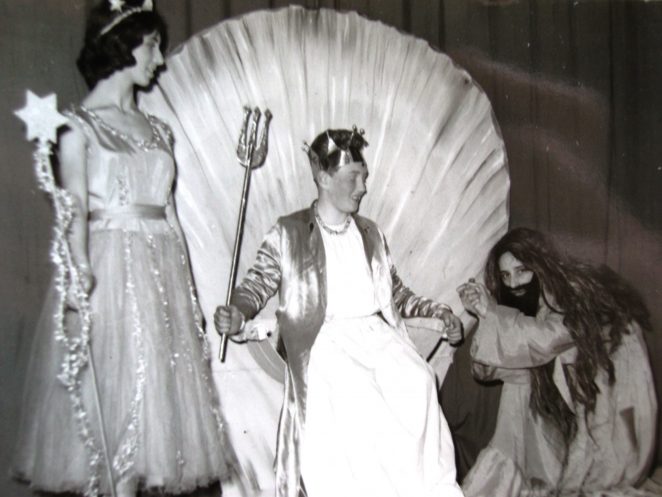 A pantomime which definitely had something to do with King Neptune ??? Myself as Fairy, Richard Bills on the shell throne, and Martin Surman clearly begging for forgiveness of some kind of misdeed.