You are here: HomenextPeoplenextLocal folknextKen Chambers: appearing on BBC 2 programme 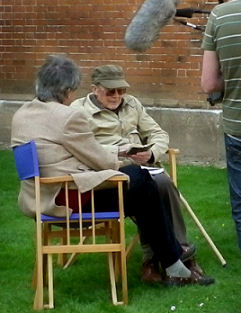 Ken Chambers being interviewed for the programme

In 2009 I published a website review of the book ‘Brighton Diaries: Memories of a Young Man in Peace and War 1929-1943’ by local man Ken Chambers. It was an interesting book about Ken’s experiences and it sold very well. Now Ken’s memories of his time in the Home Guard are to be part of a TV programme. 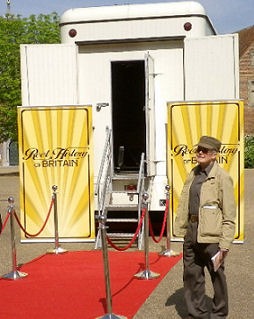 Ken outside the vintage mobile cinema

and local regional archives. The BFI is the home of the world’s largest and most diverse collection of film, TV and film-related material.

Filming for the programme

89 nine year old Ken filmed his contribution in April at Osterley Park, and he told us about his experience when he was filmed in the UK’s only surviving vintage mobile cinema – a converted Sixties Bedford van, complete with a 22-seat cinema:-

“The event went very well and I was there four hours – it was a good day – About twenty or so attended and I had two or three interview sessions while being filmed, as well as individual camera shots. There was a film show in a restored mobile cinema to start with. It was like a furniture van and the seats faced the back so when the doors were closed they became the screen with the projector just behind the driver’s cab. There was a BBC camera in front, below the screen, which traversed from side to side filming the expressions on our faces. We were shown an old wartime film of the Home Guard and another they had made using a re-enactment team”.

When you can see the episode

The series starts on BBC 2 on Monday 5 September, and the episode featuring Ken and his Home Guard colleagues is on Monday September 12th at 6.30pm. If you can manage to watch, you can leave any messages for Ken in the comments section below. 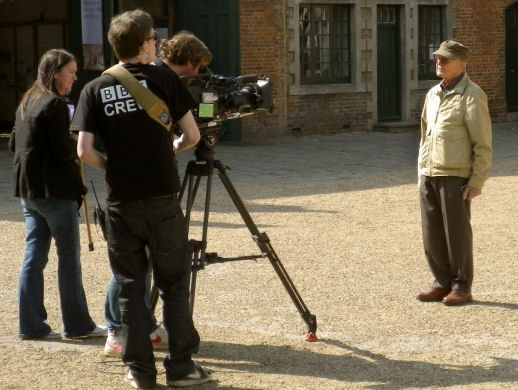 Ken being filmed for the programme