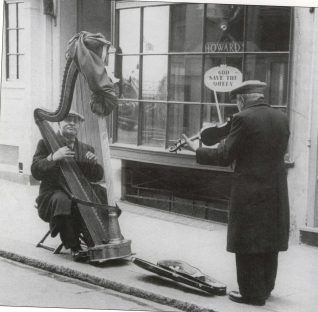 This photograph shows my old neighbour Frederick Alexander who used to play his harp outside Hanningtons in North Street, and also in the East Street area during the 1950s and early 1960s. The violinist was Joseph Marcantonio, who died before we moved to Twineham Road in Whitehawk, therefore I never knew him. We lived at number 5 Twineham Road, and Mr Alexander (as we knew him) lived at number 3.

I believe Frederick’s harp is still owned by one of his descendants as my sister is still in contact with one of them.