You are here: HomenextPeoplenextLocal folknextHove Sea Cadets in the 1960/70s 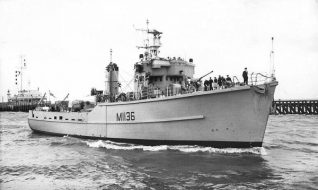 I was a member of the Hove SCC unit from the late 1960s to the early 1970s, when the unit was based at the HMS Sussex RNR HQ at Maxwell’s Wharf. The unit met twice a week, typically Tuesdays for band practise and Fridays for class instruction. The unit was originally based at the former RNR base adjacent to the King Alfred swimming pool.

Other names I can recall are: Keith Parker, NickForest, Kim Siddal, Jim Kavenagh, Steve Flowers, Sullivan, Johnson, David Miles, Duncan McKenzie, Jeff Hart, Crump, Mocket, Heaton, Norris, and Stoner. Interestingly a number went into the RN via HMS Ganges, the boys training establishment. NickForest and Jim Kavanagh I knew because we were pupils at De La Salle College in Hove. In the early 1970s it was renamed Cardinal Newman, and later Newman. Some of us undertook the Duke of Edinburgh’s Award Scheme, with a number of unit members attaining the Bronze, Silver and Gold awards.

Periodically, the Minesweeper HMS Curzon, M1136 (later reverted to her original name HMS Fittleton in 1976), was berthed at HMS Sussex. She was one of the “Ton” class minesweepers and not a sea tender. She enabled the RNR crews to participate in a number of fleet exercises over the years as part of one of the RN Mine countermeasures squadrons. Indeed, some of the unit members would also join the Sussex Division RNR when they were able to.

HMS Fittleton was lost in 1976 lost when she was in collision with HMS Mermaid during replenishment at sea. A small number of her London Division RNR crew died. She was re-floated and salvaged and later was sold for breaking at Sittingbourne. Interestingly the reasons why this incident occurred were explained to a number of us in a class when I was a Midshipman Officer in Southampton University Royal Naval Unit, in the late 1970s, whilst I was at college in Portsmouth.

Over the years whilst I have been away from the south east, I would periodically meet old unit members, often by chance. NickForest was a PE teacher for a time at OakmeadsSchool in Burgess Hill. Kim Siddal plus son, I met at LindfieldPark. Crump I met at HMS Vernon the TAS school, when I was on a CCF course there in 1972. I met Sullivan, when we were working in a local manufacturing company in Portslade, in the 1980s. Jeff Hart, who played the cymbals in the band, I met in The Lanes and later again, by accident, when he was a drummer in the RAF band playing at Hurlingham in the early 1980s.

In 2003 I moved back to Sussex after some years away, I often wondered what had happened to Hove SCC with the disbanding of the Sussex and Solent RNR Divisions in the early 1990s. I joined the South Coast Branch of the World Ship Society, and there I met up with Trevor Cox, now a retired teacher from Newman school who was for a time the units C.O. in the mid 1970s. He was able to let me know about what had happened to the unit over the ensuing years and I was pleased to hear that it is still functioning albeit at a different location. I look forward to the unit reunion in November 2007.