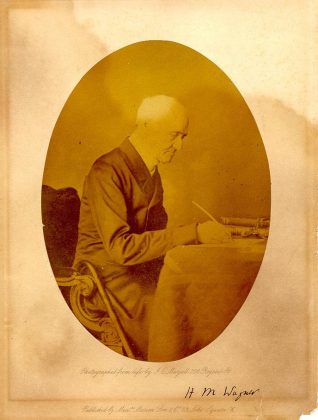 zoom
Reverend Henry Wagner was Vicar of Brighton from 1824 until his death in 1870. Born in 1792, he had 6 churches built to enable the poor of Brighton to attend services, of which St John the Evangelist and St. Paul's survive. In this photograph, Wagner is seated at a desk, pen in hand.
Image reproduced with kind permission from Brighton and Hove in Pictures by Brighton and Hove City Council

The vicars of Brighton, who were also vicars of West Blatchington from 1744 until 1941, were appointed by St Pancras’s Priory at Lewes until 1537, by the bishops of Chichester from 1615 until 1744, by the Crown from 1744 until 1824, and again by the bishops since 1824. They have always been influential figures in the town, and in the early nineteenth century the vicar was chairman of the vestry, a guardian of the poor, and an ex-officio town commissioner. He was also entitled to claim a ‘half-share’ after each fishing trip as a tithe payment. In 1873 the parish of Brighton was divided into a number of district parishes and the Vicar of Brighton was assigned to the new parish church of St Peter’s. As the vicar also holds the position of rural dean of Brighton, all parishes in the town are still responsible to him. {1,3a,63,112}
In the porch of St Peter’s Church is a list of vicars of Brighton which is reproduced below: