Fred Thomas
From the private collection of Sandra Grist 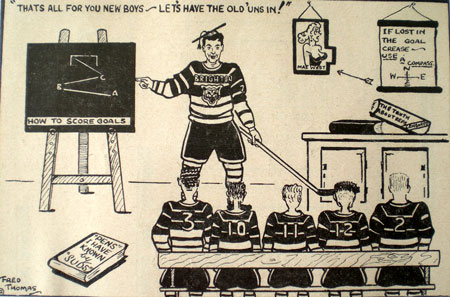 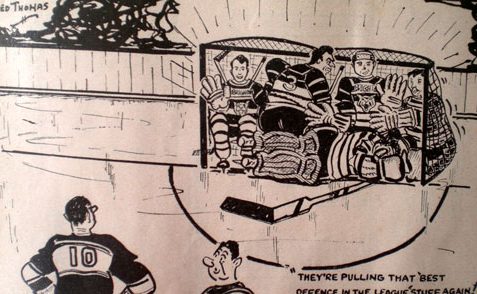 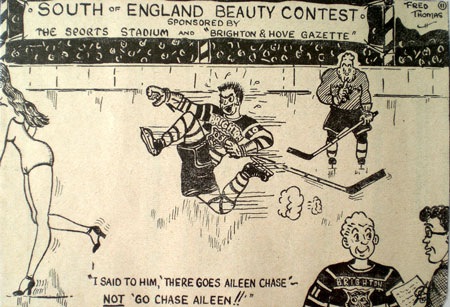 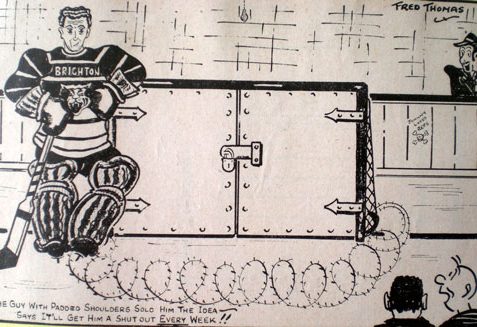 My father Fred Thomas was born on 9th March 1913, the only child of Harry and Ethel Thomas who lived in Claremont Street, Brighton. Later the family moved to Edinburgh Road and He attended St Martin’s school. His artistic talent showed up from an early age and at around 11 years old he went to art classes on a Saturday at Brighton Art College. He left school at 14 and was offered a place at the Commercial Art College in London, but sadly his parents couldn’t afford the fees. He therefore trained as a poulterer for Sainsbury’s and worked at their St James’s Street store.

A keen young sportsman
As a young man he was very interested in sport. Ice Hockey was his first love but he was also a big fan of the Brighton and Hove Albion football club. He played for a local cricket team and was a very good wicket keeper, a skill which stood him in good stead years later when he caught a flying puck as it hurled towards the crowd!

Married in 1940
He married Edna Kifford in May 1940 and they moved into his parent’s home which was now in Shanklin Road. He was called up in July 1940 and joined the Royal Artillery. He spent the war working with anti-aircraft guns and searchlights and was demobbed in 1945. By now he was the father of two daughters, Sandra and Shirley and in January 1947 his family were given a council house in Whitehawk.

A great sense of humour
He was unable to go back to poultering after the war as he had chronic arthritis and for a while was out of work. Later he joined British Rail as a clerk where he stayed until he retired at 65.  Fred went back to watching ice hockey as soon as it restarted after the war. He never missed a match and although he was a very quiet modest man he had a great sense of humour.

Cartoons of the ice hockey
He soon found himself drawing cartoons of things which had happened during the games and was persuaded by his wife to take some of them to the rink to see if they could go into a programme or an ice hockey paper. Thus began a long relationship! In exchange for the cartoons, Fred was given a press pass so that he could go to the matches for free and the family were given tickets to the ice shows. Of course it wasn’t always easy to think of ideas for the cartoon and Fred was sometimes seen sitting with his pen and inks burning the midnight oil before deadline day.

Made friends among the fans
Although he had a press pass, Fred rarely sat in the press box, choosing to stand among the fans, some of whom remained life-long friends. The great Alan Weeks, who was the publicity manager of the ice rink was always very encouraging, it was a hugely sad day when the ice hockey had to stop and the rink demolished in 1965.

A favourite memory
Throughout the rest of his life he spoke about matches and player and one of his favourite memories was a match between the Tigers and a Russian team (Tony Parise in goal?). The Tigers won and the atmosphere was amazing. He had taken his daughters and a nephew with him and in those days there was a string net around the ends of the rink as a safety precaution. His nephew had become so excited that he chewed a hole in the net!!

Fred carried on drawing for pleasure almost until his death in December 1982- a hugely talented man and one of the Tiger’s greatest fans.