On Thursday 14th May, the new Mayor of Brighton and Hove, Councillor Ann Norman, was inaugurated in a civic ceremony at Hove Town Hall. Her consort for civic duties will be her husband, Councillor Ken Norman.  Both Ann and Ken are Brighton born and bred; they live in Westdene with their cat Silver, and four Tibetan Terriers called Rosie, Lois, Farlee and Abbie. 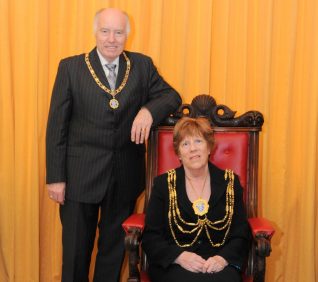 Ambassadorial role
The Mayor is the first citizen of Brighton & Hove and represents the council at public affairs, civic and ceremonial events both in and outside the city. The Mayor has a social and ambassadorial role to play and is a figurehead for the community. Ann has chosen four locally based charities to support during her mayoral year. They are Friends of Brighton and Hove Hospitals; The Alzheimer’s Society; The Martlets Hospice, and the Sussex Heart Trust. 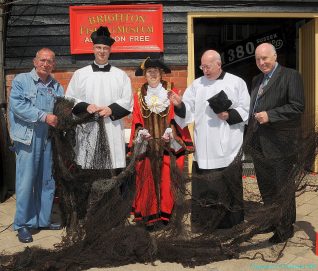 The Blessing of the Nets ceremony in the Brighton Fishing Quarter

Blessing of the Nets
One of the new Mayor’s first civic duties was to attend the annual Mackerel Fayre held in the Brighton Fishing Quarter in King’s Road Arches. An important aspect of this event is the ceremony of the Blessing of the Nets; hymn singing was accompanied by the Salvation Army Brass Band. Musical entertainment was provided by the very popular Silver Sounds Samba band, the Bugle Boys and the Ultraswing Jazz Band.