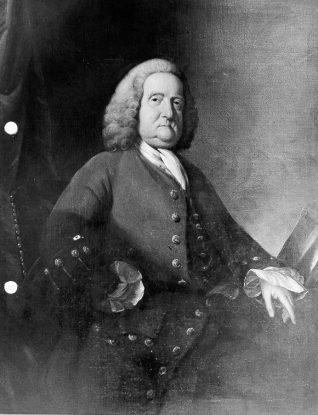 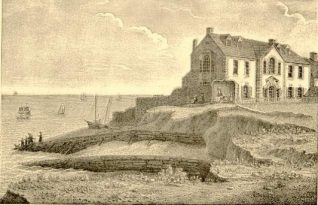 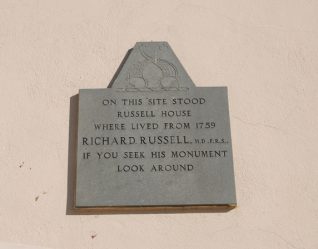 This doctor was instrumental in reviving the fortunes of the poor fishing town of Brighton in the mid eighteenth century. Born at Lewes in 1687 and educated at St Anne’s Free Grammar School, he secretly wed a Miss Kemp of South Malling and studied medicine at the University of Leyden in Holland. He then returned to practice in Lewes and lived at South Malling Deanery following his father-in-law’s death.
In 1750 Dr. Russell published a paper in Latin on the ‘Glandular Diseases, or a Dissertation on the Use of Sea-Water in the Affections of the Glands’ which advocated both the bathing in, and the consumption of, sea-water for numerous complaints. Although sea-bathing had been popular for many years. Russell’s claims for the medicinal use of sea-water in the same way as traditional spa waters were new, and he was the foremost of several doctors to bring the sea-water cure to prominence at this time.
Perhaps in the 1730s, but certainly by the 1740s , Russell was prescribing the sea-water cure for his patients at the nearest coastal town to Lewes with facilities for visitors: Brighton. As his reputation grew so the number of visitors to Brighton increased, and in 1753 Russell erected a house on the southern side of the Steine, where the Royal Albion now stands, for both his own and his patients’ accommodation; a red-brick building with dormers, central gables and an elaborate, round-headed doorway, it was the largest house in Brighton at the time and had direct access to the low cliffs at the rear. Russell moved permanently into the house in 1754, and the following year published another book entitled ‘The Oeconomy of Nature in Acute and Chronical Diseases of the Glands’ (sic). He also prescribed the waters of the chalybeate spring at St Anne’s Well in Hove, which he had enclosed in a basin.
Dr Richard Russell died on 19 December 1759 and was buried at South Malling Church where there is a small tablet to him on the eastern chancel wall; his coffin was found there in 1990. His portrait may be found in Brighton Museum, and a plaque has been erected on the southern facade of the Royal Albion, fittingly inscribed, ‘If you seek his monument, look around’.
Russell’s house was then let as a seasonal residence, and in September 1771 George III’s brother the Duke of Cumberland took the house and returned for several years thereafter. From 1807 it was used as a boarding house by a Mrs Hill for about five years, but it was subsequently used for popular amusements including Haine’s Toy Repository and Puppet Theatre. It eventually became dilapidated though, and was demolished in 1823. The town commissioners agreed to pay the then owner, John Colbatch, some £3,000 to preserve it as an open space, but a delay caused the agreement to collapse and he erected the Albion Hotel in its place.