Carrying out some family research led me to read about the Brighton and Preston cemetery where a number of my family are buried. It reminded me that I held an old undertaker’s stamped and receipted invoice of 25 June 1904, which was only 19 years after the opening of the cemetery. This relates to the funeral of Frederick James Terry, the 9 month old brother of my mother, who died on 19 June 1904, of what was probably dysentery or similar problem. 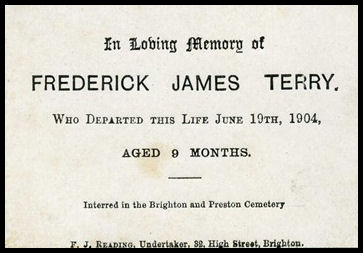 Sad but impressive
According to the invoice, the elm coffin, padded and lined with cambric (fine white linen or cotton), was carried by a single horse drawn morning carriage, probably not dissimilar to the image on the invoice. The occasion must have been very sad but I can imagine it being an impressive sight, driven to the cemetrey through the streets, and then through the arch with a small funeral procession and bystanders.

Early users of the cemetery
The 1911 Census does give more information than earlier ones. My grandparents had two other children who died before reaching one year; in 1896 and 1897 I have discovered. They were therefore amongst the earliest users of the new cemetery. Thankfully four other children survived to adulthood. 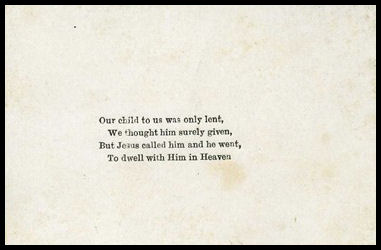 Funeral costs
The cost of the funeral was 2 guineas (£2.2 shillings or £2.10) excluding any minister’s fee, which is often waved for a young child, and stonework of course. This probably included the printing of the ‘In Memorium’ cards common in those days. The one guinea coin (worth 21 shillings or £1.05) was taken out of circulation in 1813 but the guinea was still used into the 20th century especially when quoting professional fees. Using the retail price index, the cost would be about £175 today or £900 using the average earnings increase. 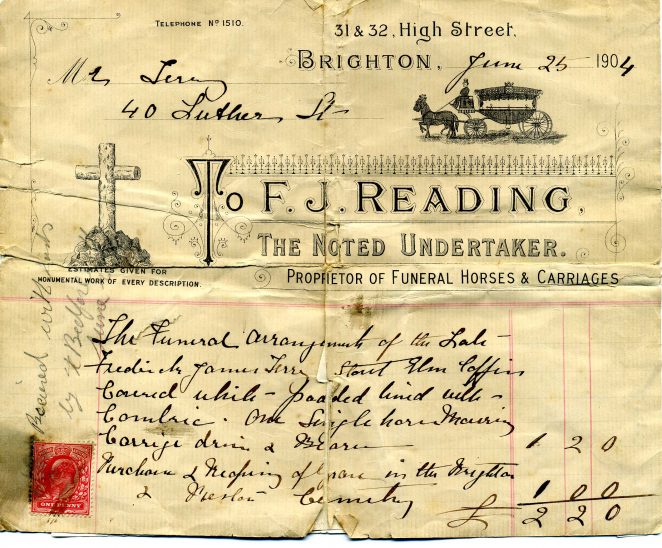