The entrance gate to Brighton and Preston Cemetery forms part of a screen of five bays of buff terracotta, flint, and wrought iron; it is late Gothic in style and dated 1885. The central bay is broad and high, forming the carriage arch. The carriage arch consists of panelled and pinnacled piers, the arch between having pointed-arched intrados and gabled extrados. The tympanum is filled with quatrefoil ornament superimposed with the words ‘BRIGHTON & PRESTON CEMETERY’. Each of the two narrower bays on either side reproduces the extrados/intrados arrangement, but with a Tudor-arched opening below it. The inner bay on either side forms a pedestrian entrance; the outer bay is filled with a wrought-iron screen. 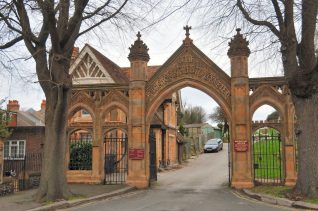 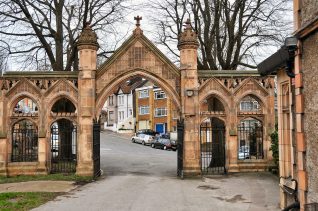 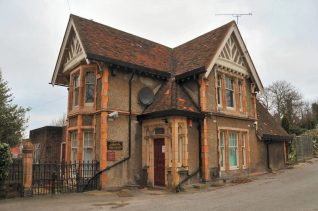 The Lodge: Brighton and Preston Cemetery 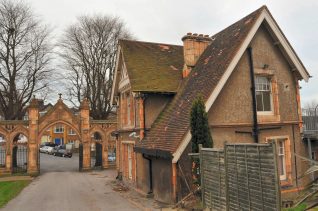 The Lodge: Brighton and Preston Cemetery

The entrance lodge is also dated 1885 on the chimneystack.  The building has two storeys over a basement. It is designed in the Old English style, with gabled wings of one-window range facing south and east; there is another gabled wing under a cat slide roof running north. The porch is in the angle between the two. It is single storey  with a hipped roof and Tudor-arched door case of terracotta; it has a fanlight and sidelights. The wing facing south has a canted bay to two storeys, the windows of which are flat-arched to the ground floor but with cusped mouldings to the first storey. The wing facing east has tripartite windows to the ground and first floor; there is timberwork to the face of the gable and moulded barge-boards.