The development of Brunswick Town in the 1820s was planned such that no shops would be built within the area of the estate. In order to supply the needs of the growing development, Wilds and Busby constructed a large Market House, in Lower Market Street but accessed from a roadway off Waterloo Street. The Market House was opened in 1828, but by 1839 other shops had opened around the area and with patronage of the Market declining, the building became a Riding School.

Initially being known as Robert’s Riding School, by 1856 the proprietor had changed from Thomas Roberts to Charles Poole and was subsequently known as the ‘West End Riding School’. With the death of Charles Poole in 1875, Alfred Du Pont took over the running of the establishment and in the 1880s bought it for £2,800. The premises were rebuilt, with a new archway fronting the access from Waterloo Street and named ‘Du Pont’s Military Riding Establishment’.

The archway is render over brick; it is a single storey with one bay. It has a segmental-headed archway opening with keystone moulded entablature and small segmental pediment. The recessed panels to pilasters have a diamond motif in the centre of each pier. In 1896 the building was used to garage the cars that competed in the first Brighton Car Rally. Shortly after the turn of the century Thomas Allen took over the riding school and the building has more recently been used as a warehouse and bacon/ham smoking manufactory. The archway was listed as Grade II in September 1971. Plans were submitted in 1978 to convert the buildings into a centre for the arts to commemorate its 150th anniversary, but it was not until 1986 that the buildings and archway were fully restored to their former glory.

Click on the images below to open a large version in a new window. 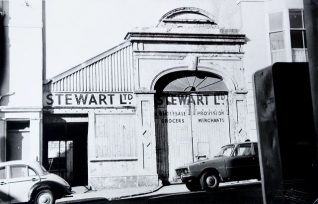 The Waterloo Street Arch photographed in 1973 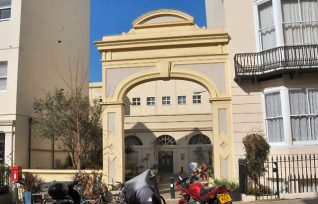 The Waterloo Street Arch photographed in 2012