The shelter was erected in the mid 19th century and reseated and restored in the late 20th century; it was built by the then Hove Corporation. It is painted cast-iron with glazed panels; the angular U-plan ends fit to a central spine. The flat roof is concealed behind a parapet pierced with quatrefoil decoration and carrying ball finials. 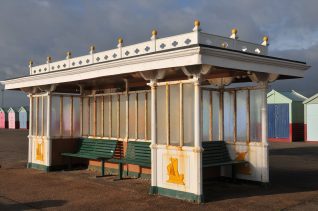 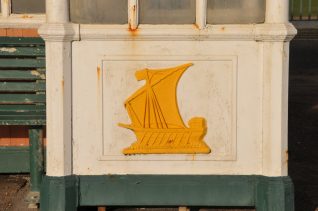 Decorated with the symbol of Hove

One of a group

Deep overhanging eaves are carried on shaped brackets springing from cast-iron columns. The shelter has dado panels with relief decoration in the form of a ship, the symbol of Hove. Mullions
between the columns sustain frosted glass panels. It has late 20th century slatted benches and is one of a good group of seafront shelters.