You are here: HomenextAreasnextPatchamnextBuilding and restoration 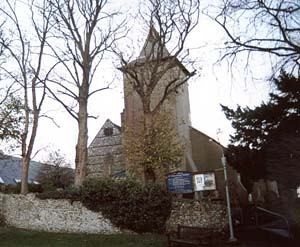 “Built principally in the Early English and Decorated styles, Patcham’s parish church stands on a hill above the village and appears to date from the twelfth century; it is probably not, therefore, the same church which is mentioned in Domesday. The oldest part is the twelfth-century nave, with the chancel and tower, topped by a turret spire, probably dating from the following century. The walls are built of flint with stone dressings but unfortunately the exterior, with the exception of the north aisle, has been rendered in cement. The south porch has a fourteenth-century Gothic arch, while above the thirteenth-century chancel arch are the remains of a painting of the Last Judgement which were discovered during a restoration of 1883. Within the chancel itself is a chalk memorial to the Shelley family of Patcham Place.

All Saints’ Church has room for 350 worshippers and is now a listed building. It was restored in 1825-30, 1856, 1883, in 1898 when the vestry and north aisle were added and the exterior was rendered, and 1989. It is also said to be haunted by a tall, thin lady dressed in grey who sits in the pews on frosty nights. A church hall was dedicated on 3 November 1986 in the adjacent Village Barn, formerly the barn of Patcham Court Farm. Connected with the church are the Mackie Hall and the Church Hall of the Ascension, Westdene.

The village war memorial stands within the churchyard, while on the northern side of the church is the grave of one Daniel Scales, shot by customs men on his way to Patcham with contraband on 7 November 1796. An eastern extension to the churchyard was consecrated in 1949.”