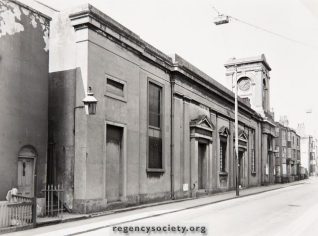 zoom
All Souls Church, Eastern Road
Image reproduced with kind permission of The Regency Society and The James Gray Collection

Incense up my nose

I remember All Souls as I went there as a youngster, aged about six I guess. I cried my eyes out the first time. I later joined the choir and was there until I was 10 years old, when we moved to Lower Bevendean. I remember a Father Bott, the sacristan Mr Rhodes and Peter Kite, who was a very good tenor in the choir. I think a Mr Taylor was organist and choir master. I remember solemn evensong with Benediction, and priests prostrate on the Altar steps, which used to fascinate me. The incense used to get up my nose in the choir.

The crypt was creepy

At morning service Mr Rhodes used to follow the Vicar very swiftly down the aisle as he sprinkled holy water. I was confirmed at the church. I remember the elaborate Nativity Play with proper make up and clothes. We dressed in the crypt where the tombs were; I always found it very creepy. We performed the play in church on two nights and somewhere nearby for the elderly.  I used to enter the choir vestry from the Hereford Street entrance at the rear of the church. This was below the level of Eastern Road, and on the same level as the crypt I think.

Sunday School at All Souls

Mr Rhodes ran a boys’ club for members of the choir. I lived next door to him in a flat in Hereford Street and used to sometimes play with his daughter Catherine.  I went to St Mary’s Church of England School in Mount Street, although All Souls School was available in Essex Street. I do remember the school caretaker’s son, John Brookshaw, who was in the church choir. I used to go to Saturday morning pictures with him at the Odeon Kemp Town.  Sunday School was in the afternoon at All Souls School. I went to that as well as morning and evening service.

My wife and I visited All Souls Church in about 1965, the year we got married. This must have been not long before it was demolished. Mr Munch, former Head of All Souls School, was welcoming people and handing out hymn books. It was sad to see such a small congregation and the extensive choir was no longer. In fact it is still sad to see much of my early childhood gone with modern redevelopment, including my old school. The father of a friend of mine recalls working at the church at the time of demolition, and all the tombs being removed; the bones were boxed and buried in a communal grave in Bear Road cemetery. I still look back at my time at All Souls with affection and gratitude.