A history of Brighton Quaker Meetings 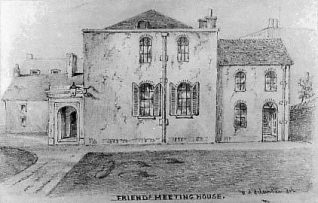 zoom
The Quaker Meeting House, Ship Street, Brighton. The first Meeting House had been an old Malt House in New Road dating back to 1716.
Sketch by W.A Delamonte, 1853 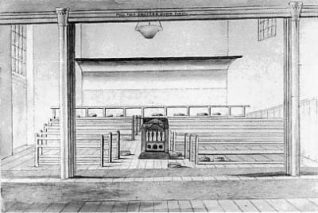 zoom
Inside the Meeting House. The shutter in the picture was pulled down to make a special meeting room for children. The Meeting House was heated by a coke stove in the centre of the room. The high windows were to stop any distraction from silent worship.
Sketch by W.A. Delamotte, 1853 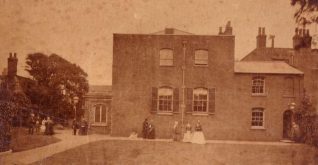 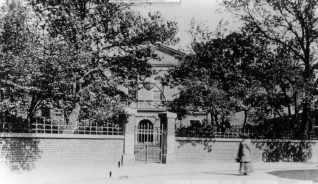 Attacks in the Seventeenth Century

The first Quaker meetings in Brighton were attacked in a way typical of the rest of the country. The independence of Friends was seen as a threat. In 1658 Anglicans coming from church ‘fell to breaking the windows of Will Gould’s house and one woman with her bible broke much thereof and then flung filth upon the people and in their face …and then they hauled Joseph Fuce out of the towne threatening to cast him in ye sea if they came againe and thrust and stoned others along the streets’. As a result of this persecution Quakers met at West Blatchington and Rottingdean until 1700. In that year worship began in a converted malt house sited at what is now the southeast corner of New Road.

By 1700 there were many dissenters in Brighton. In that year 25% of live births were to Presbyterians, the largest group, or Quakers. The number of dissenters in Brighton had not gone unnoticed by the authorities. The S.P.C.K. had been founded to address dissent through education – children were taught to read the catechism – and opened the first public school for boys in Brighton in 1702. By one of those strange twists of history the trustees appointed John Grover, a practising Quaker, as schoolmaster. Half the boys in the town attended the school and John Grover remained the schoolmaster until he died in 1750. He became a notable figure and helped many with such legal documents as wills and deeds.

Move to the present site

Local Quakers moved to the present site in 1806 when the Prince Regent wanted to extend his garden and close the road that ran past the entrance to the Pavilion. The land, a burial ground, was sold and New Road constructed. The current meeting house was built on a plot owned by a Quaker butcher called John Glayzier. Only the meeting room and cottage were built. The entrance was by the side door with a path leading round through what is now the lecture room and canteen to ‘Meeting House Lane’. This lane already existed and led to the Presbyterian meeting house, now the Font and Firkin public house. The current front entrance was a plain wall with two small windows. Windows were placed high in the walls to stop any distraction from silent prayer.

There was another path to Ship Street. Prince Albert Street had not been built and the view from the current porch was of the back of a row of cottages on Ship Street. What we now refer to as the garden was a burial ground for 54 adults and 34 children. Quakers were buried in their own land in unmarked graves. The whole site was originally part of the grounds of St. Bartholomew’s Monastery. Legend has it that the forebears of the fig trees in the garden were in the monastery orchard. This is given some credibility by the fact that another fig tree survives nearby in Black Lion Lane.

The meeting house was heated by a centrally placed coke stove. The vent for this can still be seen in the middle of the room looking like a decorative feature.

Brighton Meeting grew with the town in the 19th Century. In 1851 the census of attendance reveals a membership very similar in size to the present one. In 1875 an adult school was added to the north of the building and the current entrance constructed. The adult school was the forerunner of the Friends Centre and adult education classes have been held continuously in this building since 1876. The Friends Centre was founded by Quakers in 1945 and grew out of the recreational activities run for Canadian troops in the Second World War. It is still supported by Quakers and is only one of a handful of independent centres in the country.

The adult school taught writing – most could read – bible studies, temperance, literature and socialism. The classes for 1892 include ‘class extinction, Christian socialism and Christian secularism. A ‘sick and coal club’, savings bank, book club, library, mothers’ meeting and free breakfasts were all provided. The participants organised themselves and founded groups such as ‘The Federation of Working Men’. Brighton was the base for the London, Brighton and South Coast Railway and even steam engines were built here. Most of the participants in the adult school were railway families.

Quakers and the wars

Pacifism is a central practise of Quakers. In our own meeting the current Peace and Social Witness group was begun in 1934 as the Peace Committee and one of our members, Alan Staley, was a co-founder of CND. How have Quakers dealt with the fact that Brighton has always been a major garrison town? The answer is an interesting one. In both world wars local Quakers supported the young soldiers as fellow human beings. They provided social activities, including help and materials for writing home, as an alternative to pubs and gaming. Commanding officers would not have allowed the soldiers to attend had pacifism been openly promoted by local Quakers.

The ghost of a nun, Brighton’s most famous spectre, is said to walk down Meeting House Lane and through the bricked-up arch to the left of the back door. She is said to have been bricked up here in medieval times. The archway was actually filled in sometime after 1844. It was the original entrance into the grounds. Revisionists argue that the nun is actually a Quaker as dressing in grey was customary until into the twentieth century.

A quiet place in the heart of Brighton

The meeting house has become known as a quiet place in the heart of Brighton, though the liveliness of the area has presented, and continues to present, challenges. In 1883 a minute records that meeting for worship was disrupted by noise from the Brittania Beer House in Ship Street. The meeting house is not only used by the Quakers and the Friends Centre, it is also a venue for many marginal, alternative and non-violent social and radical groups and causes a ‘den of nonconformity’ in the heart of Brighton.