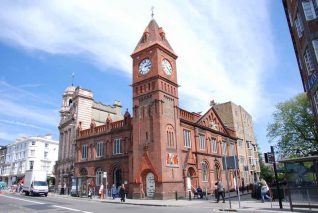 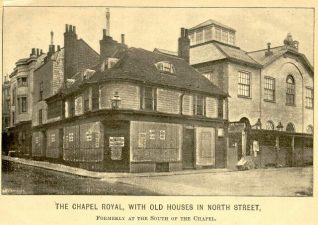 zoom
Chapel Royal, c. 1876: The Chapel Royal was built in 1793-5 by Thomas Saunders for Revd Thomas Hudson, Vicar of Brighton and became a chapel of ease to St Nicholas' Church in 1803. Above the chapel there is a Coade stone coat of arms, which remains. This photograph shows the chapel before it was extensively rebuilt in 1876-82 by Sir Arthur Blomfield. The buildings on the left are about to be demolished to enable North Street to be widened. The current clock tower and new entrances were added in 1882. The glazed lantern was designed by G. Lynn of Brighton and added in 1848.
Image reproduced with kind permission from Brighton and Hove in Pictures by Brighton and Hove City Council 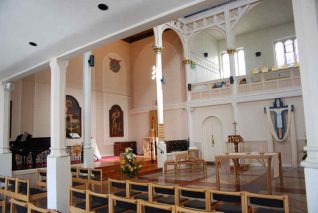 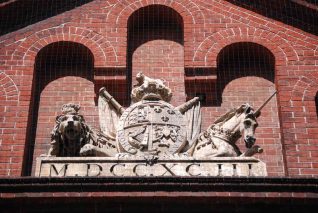 e) CHAPEL ROYAL: Designed in classical style by Thomas Saunders, the Chapel Royal was built in Prince’s Place in 1793-5 for Revd Thomas Hudson, Vicar of Brighton, as an alternative to the very cramped St Nicholas’s Church. Hudson hoped to attract the Prince of Wales to the new chapel, and it was His Royal Highness who laid the corner stone on 25 November 1793. The Prince and Princess of Wales were also present at the first service on 3 August 1795, but he attended irregularly, and after an objectionable sermon by Hudson never worshipped there again. During the resort season, services were conducted by court clergymen for the first few years, with all seats rented. In 1803 the Chapel Royal became a chapel of ease to St Nicholas’s and was consecrated by the Bishop of Chichester. Hudson resigned the curacy in 1808.

The building remained largely unaltered until 1876 when the Revd C.S.Childer started a fund to buy out the proprietary rights and to reconstruct the building. The interior was remodelled in the same year with a nave, aisles, a small chancel at the western end, and galleries on three sides. The classical exterior, with its colonnade, was rebuilt by Arthur Blomfield in Renaissance style, in red brick with round-headed doors and windows. The chapel reopened on 6 February 1877, but following the demolition of buildings for the widening of North Street, the newly exposed south front was also rebuilt by Blomfield in 1879 and the clock tower and new entrances were added in 1882. The eastern facade still bears the original date of 1795 though, together with the royal arms.

The Chapel Royal became a parish church in 1897, but the parish was merged into St Peter’s once again in 1978. There are extensive vaults, probably intended as a burial chamber, but used in the past as a store for adjacent wine merchants and booksellers; in 1978 they were converted into a church hall, replacing 20 New Road which was rebuilt in 1986-7. The south aisle is now an S.P.C.K. bookshop. {60,64a,123}