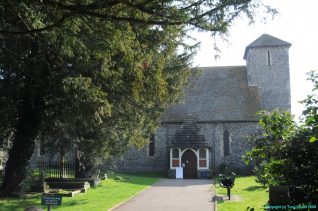 Preston, was known as ‘Bishop’s Preston’ in the thirteenth century when St Peter’s Church was built. The manor was situated at a crossing of the Wellesbourne River which created the valley along which the main London Road runs today. Over the years there has been little alteration to the church; the Victorians added a porch and small vestry, but otherwise the building remains as it was, just a simple, downland church built of local flint and chalk rubble.

The church has a number of important medieval wall paintings which survived a disastrous fire in 1906; they date back to around 1260. The clearest of these paintings shows the murder of Thomas Beckett in Canterbury Cathedral in 1170. Experts say that this painting is the second oldest depiction of the event in the country. In order to preserve the wall paintings for future generations, they need to be cleaned and conserved, so St Peter’s have launched a fundraising campaign in order to raise at least £2,500 for the work.

St Peter’s is no longer used for regular church services, but is maintained by The Churches Conservation Trust. The church is cared for on a daily basis by a team of local volunteers from the Friends of St. Peter’s. It is open to the public every day, and the group are hoping that having seen these unique paintings, that visitors might make a small donation to the fund for their preservation. They are also organising a number of fundraising events, details of which you can find on their website.

Click on the image to open a large version in a new window. Click again to further enlarge. 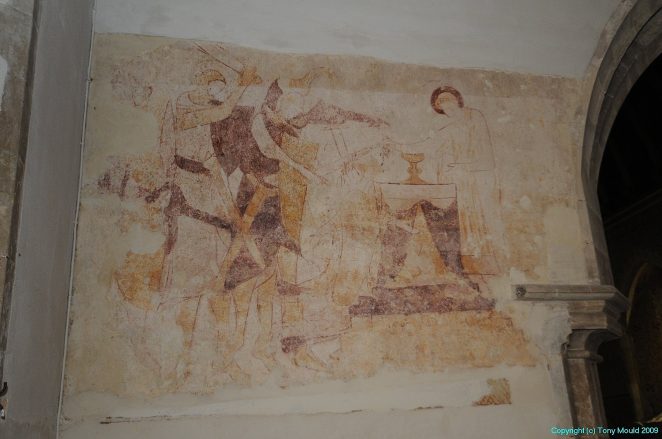 This very important wall painting of the murder of Thomas Beckett in Canterbury Cathedral in 1170, was last restored in 1977. It had been covered up during the Reformation in the 16th century and was only rediscovered in 1830