St. Anne’s Church stood in Burlington Street. It was designed by Benjamin Ferrey, who was a pupil of Pugin, the architect of much of the Palace of Westminster. St. Anne’s was faced on its exterior with Kentish ragstone. The interior featured much carved stonework by the Victorian firm, Farmer and Brindley, including many carved heads, one of which I rescued with hammer and chisel when the building was demolished.

It was closed in the mid 1980s, in spite of having the largest congregation in Kemptown, and having had the most money spent on it in recent years. The church also had some fine stained glass including a spectacular east window by O’Connor from the 1860s; a beautiful iron and brass screen enclosed the choir. This was designed and made by William Bainbridge Reynolds, one of the finest 20th century metalworkers. This was restored and is in the music room of a local house. 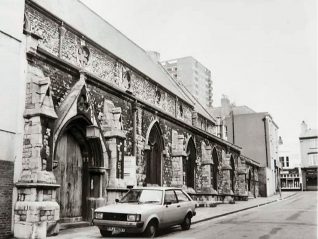 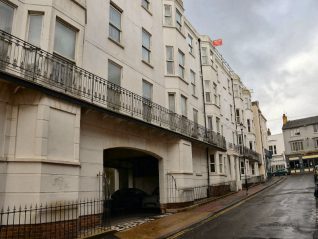 The loss of the reredos

Perhaps the saddest thing to relate is that the building had a fine stone reredos, a carved representation of the Last Supper behind the altar; it was coloured and gilded. The firm handling the demolition of St Anne’s decided that they could not extract the reredos. Unfortunately, the east wall was demolished on it; that was a terrible shame.

Do you remember St Anne’s. Did you attend services there? Maybe you live in St Anne’s Court, the building which replaced it? If you can share your memories with us, please leave a comment below.