Expansion in the early 19th century 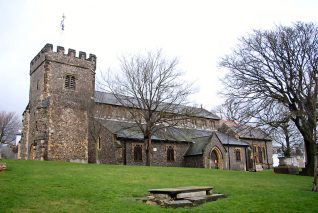 b) NEED FOR EXPANSION: As the population of the town grew rapidly in the early nineteenth century the church was enlarged by the addition of galleries which were accessed via steps from the outside; the galleries were packed with fishermen and other poorer townsfolk, while the pews were rented to fashionable visitors. The expanded church then held 1,300 worshippers, but although the first chapel of ease (Chapel Royal) had opened in 1795 and there were eleven other Anglican chapels in the town by 1846, St Nicholas’s was too cramped to serve as the parish church of such a large town. In that year however, a town meeting rejected both the obligatory rate for the church’s maintenance and also an extra rate to enlarge it; many ratepayers were not of the Church of England and so voted against the proposal. Several town polls were then held, but they all produced the same results and the impasse continued until the death of the Duke of Wellington, Arthur Wellesley, in September 1852. The vicar, the Revd Henry Wagner, suggested that the restoration of the church at which Wellington had worshipped when he was tutored in the town would be a fitting memorial to the great man. The idea was accepted by the town and a public subscription raised £4,958 for the improvements, including £1,000 from Wagner himself. {65,112}