The legend of Phoebe Hessel 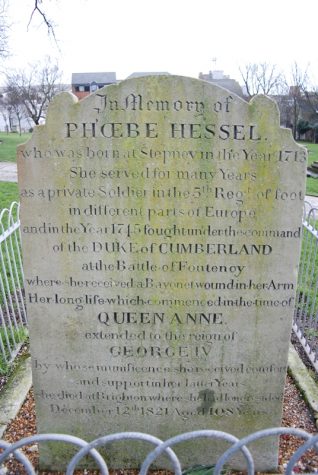 g) PHOEBE HESSEL: One of the most interesting graves in the old churchyard is that of Phoebe Hessel. Born Phoebe Smith at Limehouse in 1713, this venerable lady fell in love with soldier William Golding in 1728 and enlisted in the Fifth Foot Regiment to remain with him when he was posted to the West Indies. In 1745 she was wounded in the arm at the Battle of Fontenoy, but when Golding was wounded and invalided home Phoebe revealed her sex to the commanding officer’s wife and was discharged after an extraordinary seventeen years service in the army. The couple were married for about twenty years and lived in Plymouth.
After Golding’s death Phoebe settled in Brighton and married William Hessel in about 1769; he died in about 1792. Receiving three guineas from the parish, Phoebe bought a donkey and hawked fish and other goods in nearby villages for a living. After overhearing a conversation in a Shoreham inn one day, she provided evidence resulting in the conviction and execution at Goldstone Bottom of one Mr Rooke for robbery and murder. In about 1800, when she was eighty-seven years old, Phoebe resorted to selling ginger-bread and apples at the corner of Old Steine and Marine Parade, but not long after was taken into the workhouse. However, she discharged herself in August 1806 and in 1808 was granted a pension of a half guinea per week by the Prince of Wales. As the oldest inhabitant in the town she was entitled to sit beside the vicar at a Napoleonic celebration dinner on the Level on 12 August 1814, and, although now blind, she attended the town’s coronation celebrations on 19 July 1821. Phoebe Hessel died on 12 December 1821 at the age of 108, but only one of her nine children ever reached adulthood.
Recent research {285a} has revealed evidence conflicting with Phoebe’s story; indeed it was only later in her life that she recalled her military exploits, and it has been suggested that the tale is merely a good bar-room story designed to encourage listeners to open their purses. However, the Northumberland Fusiliers, successors to Phoebe’s alleged regiment, certainly believe the story as they restored the grave in the 1970s.
{3,7,24,57,90,285a}