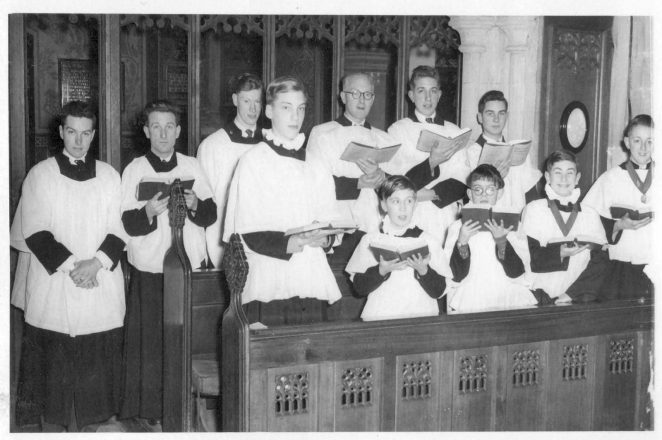 I joined the choir at St Nicholas’ in 1948. At that time it consisted of twelve boys and twelve men, equally divided between tenors and basses. The choir master and organist was Leonard Darling. He lived at Maresfield and was also a teacher at Whitehawk School. He drove a black Ford Anglia which was regularly seen parked in Church Street.

Choir practice was on Mondays for boys only and Fridays for the full choir. In those days the entrance to the choir vestry was in Church Street. and down the stairs to the vestry. The vestry door was literally a stone’s throw from my garden gate in Mount Zion Place. The boys were paid quarterly, but for weddings it was 2/-. Sometimes we had two or three on a Saturday and if any boys were absent we had a bigger share of the pot. Financially we did well and I was luckily one of the highest earners. With my paper round pay as well, I probably had more spending money than my dad.

Christmas was a good time for us boys. We had two hospitals in the parish and used to go round the wards carol singing on Christmas Eve. We started at the Ear, Nose and Throat Hospital in Church Street, before going to the Alexandra Childrens’ Hospital in Dyke Road. There we joined the nurses, forming a large procession with lanterns. When we finished we all had a very entertaining supper. After this it was a couple hours sleep before attending Midnight Mass where a full choir was needed.

A major event in Brighton c1953 was a choir festival, which was held in St Peter’s Church and included choirs from churches of Brighton and Hove. It was exciting for our choir to be part of such an event. There were three vicars at the church during my time there. First was Father Phillips who moved on to the church at Worth, near Crawley. He was followed by Father D.M.Ivor Walters, and then Father Walker. The Vicarage was at 6 Montpelier Villas, houses which now go for a million.

I remained a treble until about 1955 when I became a tenor; I left the choir in 1965 and only in recent years have returned to choral singing with Sussex Voiceworks. To this day I remember all of the hymns, as well as regular works such as Stanfords Te Deum, Jesu Joy of Man’s Desiring, and The Reproaches, sung on good Friday. We had regular versions of the Sanctus, Agnus dei, Benedictus, Magnificat and Nunc Dimitus. Some of these were Harwood, Ireland, Walmisley, Darke, Wood and Stanford. Whatever happened to all of that music? 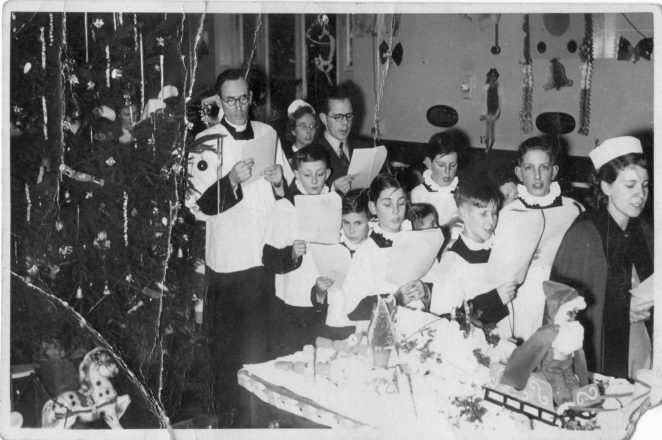