You are here: HomenextPlacesnextCinemasnextAstoria Cinemanext"The Big 4" and "My first date" 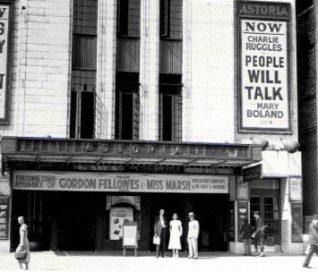 zoom
Astoria cinema, London Road, Brighton
Image of the Astoria from the 'My Brighton' exhibit

The Big 4
by John Merrington

“I remember the 40s, 50s and 60s when the Astoria was one of the ‘Big 4’. If you were going to the ‘pictures’ and it it involved one of these cinemas, it was a special occasion. The ‘Big 4’ Cinemas (my terminology) were:

I remember there was a Saturday Morning Club where kids paid 9d, when the normal minimum entry was 1/6d. I didn’t use it, but did see the children waiting outside for the doors to open. Those days I was more inclined to hit the ‘Scratch’ on Sunday afternoon for 9d worth of Tom Mix or Hopalong Cassidy.

I probably used the Astoria only about a dozen times, but it was a wonderful cinema. My grandfather, who enjoyed taking me to the pictures, had a preference for the Odeon on West St. I remember seeing “Treasure Island” at the Astoria and “Red River” at the Odeon with him. For sure the Odeon, and probably the Astoria, had hand sets which plugged into the seats for those patrons with hearing problems…”

My first date with my former husband
by Olive Sant

“What memories these places bring back! The Odeon on West Street was my first date with my former husband . We sat in the back row and saw “The Sign of the Pagan” after having dinner at the Taj Mahal Indian Restaurant situated at the top end of West Street way back in 1954.

I remember being taken to the Savoy during the war about 1944 or 1945 to see” The Wizard of Oz” . I remember two things about this trip, one was the horror I felt when the Wicked Witch’s face filled the screen, and the other memory was of the barbed wire along the sea side of Marine Parade.