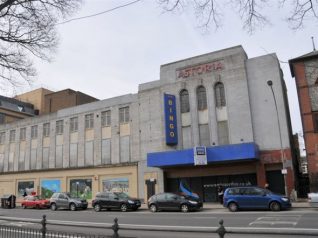 Free entry as a monitor

The Astoria was a great place for kids to go on Saturday mornings in the 1950s. The entrance fee was six old pence and it was about a three hour show. Rather than employ an entire staff of adults, the manager got some of the older children to act as monitors and then gave them free entry. I was a monitor there and recall having to give out picture cards to the smaller children attending. The aim was to get them to collect entire sets by coming back week after week. When they had a full set, they got a badge. As monitors we always ensured we got full sets of the cards and the badges. I’ve still got some tucked away in a drawer somewhere.

While the kids were at the Saturday morning cinema, busy mums had to dash from shop to shop in London Road to get the weekend groceries. No supermarkets in those days! The mothers often went to Bellman’s, where the sales assistants put all money tendered into a catapult system and shot it across the ceiling on wire to the cashier’s desk. After that they were off to Sydney Street, where butchers wearing bloodstained aprons and boaters often stood in the road outside their shops discounting their meat. Each joint had a little wire skewer in it, and at the end of the day you could often get two joints for the price of one.