Memories of a 1960s student 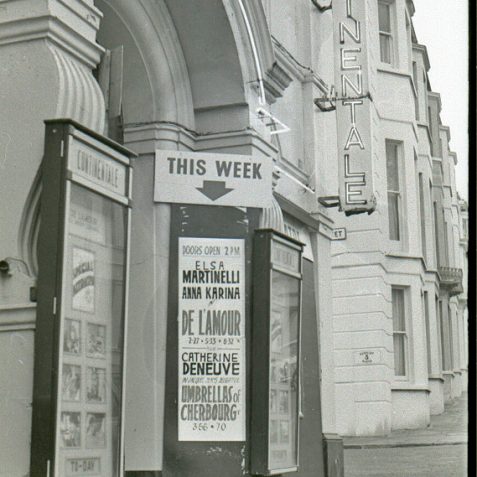 A closer image of the facade
Photo by Rosalind Merriman 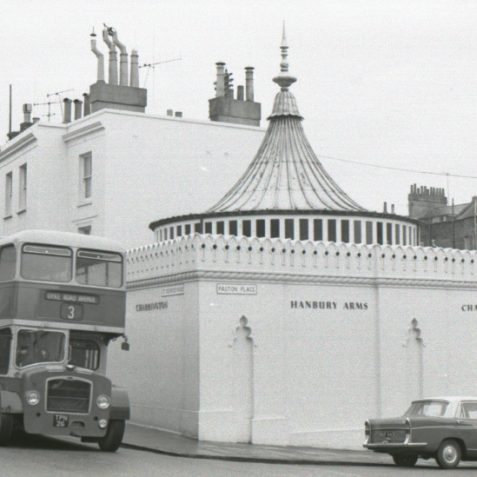 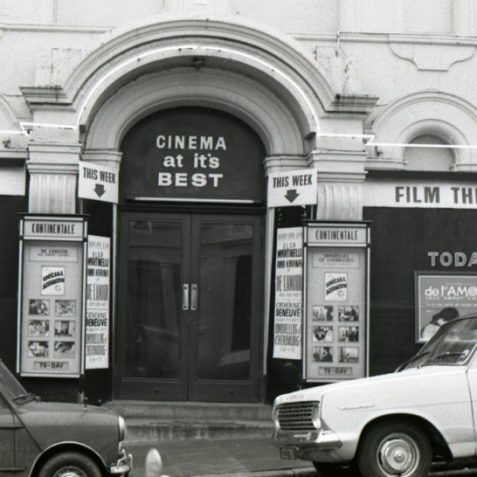 The facade of the cinema circa 1966
Photo by Rosalind Merriman 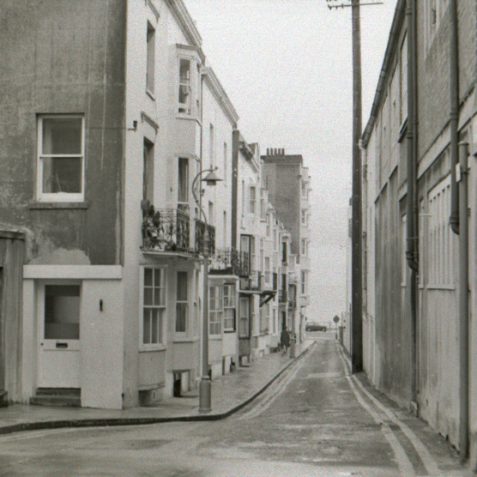 An old friend recently found  a set of  35mm negatives dating from her Brighton Art School days in the mid 1960’s. She passed them on to me to scan. Among the many images I found were these of the old Continentale Cinema, Paston Place.

A Miles Byrne cinema
This was a Miles Byrne cinema. It showed, as its name implies, mainly foreign language films. The works of Bergman, Fellini, Truffuat and Jean Luc Godard, were all shown there on their original release. Myself, and my fellow film crazy art students seemed to spend most of our time there.

Queuing in all weathers
I can still hear in memory little bits of French or Italian dialogue with that curious, almost underwater wobble that the sound system sometimes gave them. We would queue outside, lining up in all weathers, to see Nouvelle Vague films as they arrived, which they seemed to do in bewildering succsession.

Falling in love with the stars
In 1964, I, and many others of my generation, fell head over heels in love with Jeanne Moreau in Jules et Jim, and then in turn with Anna Karina in Godard’s Bande Apart. If you look closely at the front of the cinema in the photograph, you will see that two films are advertised, De L’Amour with the above named Anna Karina, and The Umbrellas of Cherbourg, that enchanting sung through musical directed by Jacques Demy  and starring Catherine Deneuve. This would date the photograph to around 1965, as the film’s original French release date of both films is 1964. Of course they could have wound up at the Continentale backwater a little later than that.

Unique viewing opportunities
This dear little cinema was the very lifeblood to us eager students. This was of course in the time long before Video or DVD, and there was no other way of seeing these films except on first fleeting release. The Continentale was Brighton’s equivalent of Hampstead’s Everyman, or The Electric Notting Hill, seemingly managed and run by individuals with a deep love of cinema.

Escaping on a wet afternoon
Obviously the beautiful Regent cinema was  a lot more comfortable, and the Astoria had peerless 70mm projection, but none of them showed the kind of films that we craved. Where else on a wet afternoon, escaping from a series of dreary typography classes, could you sneak off and watch the classic Citzen Kane two days in a row?

Films that cast a spell
Of course the sound in The Continentale wobbled sometimes. Yes, the screen was a fairly small and imperfect one, but what glories we sat through in those first runs. We watched the astionishing opening of Fellini’s Eight and a Half, sighing with pleasure as Anna Karina danced the madison, and weeping as Jules et Jim unfolded its lyrical tragedy. For months after my friend Michael Embden and I sported our own attempt at identifying with the characters in the film by wearing striped blazers and white trousers, even through the winter, so great was the spell.

A local connection
A closer look at the photographs will reveal something with a local connection. Just visible is part of the poster for the film De L’Amour. This was printed from a woodcut and designed and cut in his very distinctive style by Peter Strausfeld, a German émigré artist and designer who taught part time in the graphic design department at Brighton College of Art in the 60’s. He designed dozens of film posters  mostly for the Academy Cinema in Oxford Street London. These were printed in very short runs and are now scarce and collectible. The BFI (British Film Institute) have recently made his work widely available reproducing his posters on a range of items.

I have no idea when the Continentale closed up shop, I moved to London in the late sixties and so shifted my allegiance to the Everyman and The Screen on The Green. Seeing the photographs brought it all rushing back.