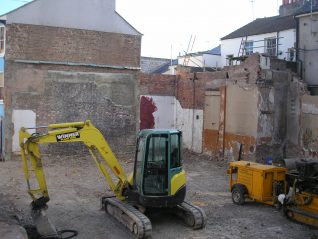 zoom
Plenty of room in the Front Stalls!
Photo by Peter Groves 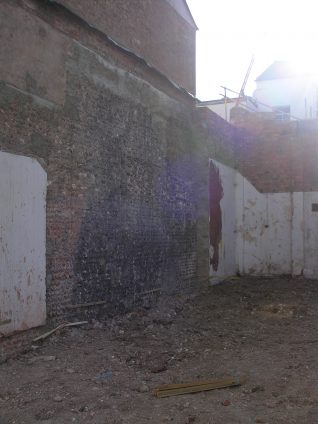 zoom
The old flint wall of the Embassy Cinema.
Photo by Peter Groves

It’s a shame, but inevitable, to see the demolition of the old Embassy Cinema underway.  Times have changed so much since the heyday of cinema, when Brighton and Hove had an unprecedented number, with television in the 1960’s bringing the gradual closure of the vast majority.

Embassy opened c1912
The Embassy on the corner of Western Road and Little Western Street opened around 1912 as the Hove Cinematograph Theatre, the auditorium being on the rear of commercial premises, which had frontage onto Western Road.  It changed ownership a number of times, in 1922 was owned by George Beyfus who also owned the Queen’s Electric Bioscope (Curzon) close by on the opposite side of Western Road, he changed the name to the Tivoli.  Ownership changed again in 1948 and it was renamed the Embassy.

Cinema going memories
I remember seeing some great films at the Embassy in the 1960’s. Sink the Bismarck (1960) with Kenneth More, the true story of the chase across the North Atlantic to sink the German battleship before it could sink our convoys.  The end of WWII being barely twenty years before, it brought home the reality of war to 3 young lads sitting at the very front of the stalls eating chicken paste sandwiches!  We all had tears in our eyes and revenge in our hearts when the Bismarck sunk HMS Hood!

Favourite films
On the Beat (1962) with Norman Wisdom, the police chase was so funny, with Pitkin being chased, seemingly by the whole of the Metropolitan Police force, fence hopping over back gardens to get away, with the whole audience on his side.  Robin and the Seven Hoods (1964) was the third of the 3 films that I definitely remember seeing at the Embassy.  The legend of Robin Hood is transposed to 1930’s gangland Chicago with the famous “Rat Pack,” it was the last of their movies.  My favourite scene is the opening night of the new gambling and drinking club.  As the sheriff and his baddies arrive to raid the club, a switch is flicked and the scenery changes into a spiritual meeting, with singing about the dangers of alcohol, much to the shock of the baddies.

Continuous viewings
The Embassy was not one of the main cinemas of the town; the films shown were re-runs after they had previously been shown at the town’s main cinemas.  The programme ran continuously so it was possible to see the film over and over again.  The cost to get in was approximately 1/-, (5p) which was about the same as a swim at the King Alfred, our other favourite activity on a Saturday afternoon.  I probably saw other films at the Embassy, however these 3 stick in my mind, quality films!

Closed as a cinema in 1981
The natural slope of Little Western Street gave the stalls the perfect gradient, which can be seen in the photos.  The ‘silver screen’ once adorned the old flint wall and brought to life all the film stars of the 20th Century! The Embassy closed in 1981 and was used for other commercial activities until July 2007 when the auditorium at the rear was demolished.