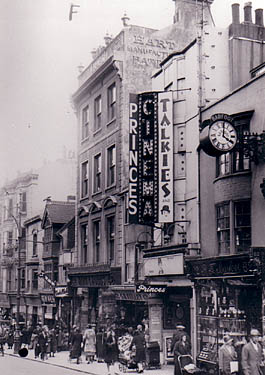 My earliest memory of this wonderful little cinema was seeing the colour newsreel of the Queen’s Coronation – I would have been all of nine years of age!

Being the age of innocence, I often took the bus from Hove with my mates to visit the cheaper cinemas – there was one right on the seafront, opposite the West Pier, which was still showing silent movies at the time. The proprietor must have been a complete dinosaur as he refused to give in and show the new-fangled talkies, never mind colour! I wish I could remember the name of the place.

Returning to the Princes News Theatre (its proper title!), I remember the program line-up consisted of a serial such as ‘King of the Rocket men’, a couple of cartoons, a short film such as ‘the Marx Brothers’ and of course, the Pathe News.

One afternoon my mates and I were kicking an icecream carton along the row and it stuck to end of my shoe. On bending down to retrieve it, I spotted a pound note stuck in the remnants of the icecream! After an extremely short debate as to whether we should hand it in, we made a hasty exit and spent our ill-gotten gains playing the amusement machines on the West Pier! ( Our preferred pier as they only charged 9d as opposed to the 1/- for the Palace Pier – that’s my theory for the failure of the West Pier! )

My ex-wife used to work for a firm of chartered accountants with offices above the Princes Theatre – if I remember correctly the company’s name was ‘Friend-James, Sinclair and Yarnell’.