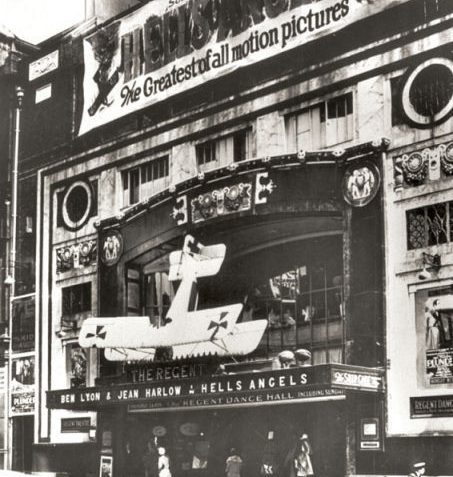 This black and white photographic print shows the front of the Regent cinema in Queen's Road, Brighton. The top of the building is covered by a large banner advertising 'Hell's Angels', an early 'talkie' film. A Tiger Moth aeroplane has been suspended above the entrance.
Image reproduced with kind permission of The Royal Pavilion and Museums Brighton and Hove 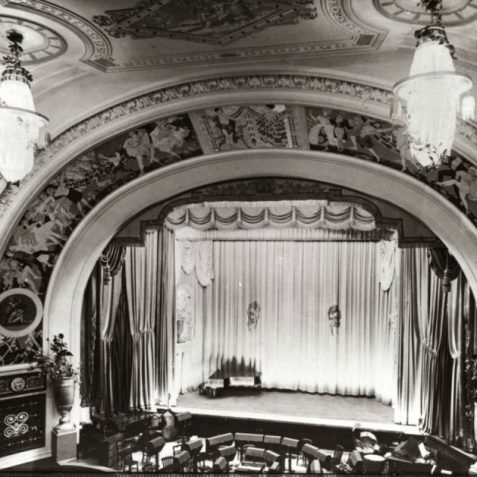 A view of the centre stage with the orchestra pit visible at the bottom of the picture. The photograph is focused on the theatre's Proscenium Arch. This was painted by Lawrence Preston of the Brighton School of Art, and features a number of dancing figures.
Image reproduced with kind permission of The Royal Pavilion and Museums Brighton and Hove 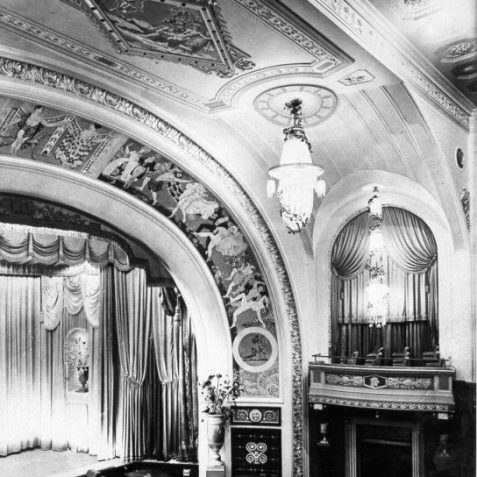 Close up view of the Proscenium Arch, also showing a box and ornate ceiling decorations
Image reproduced with kind permission of The Royal Pavilion and Museums Brighton and Hove 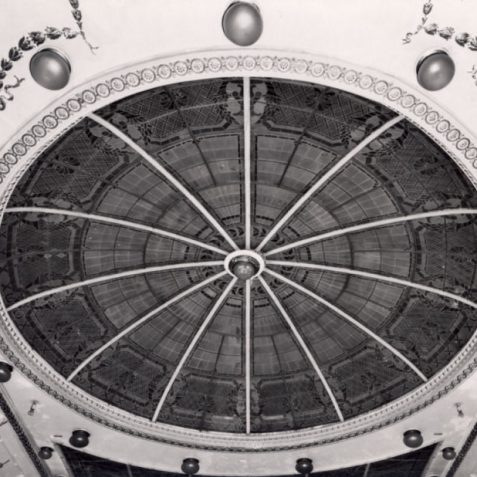 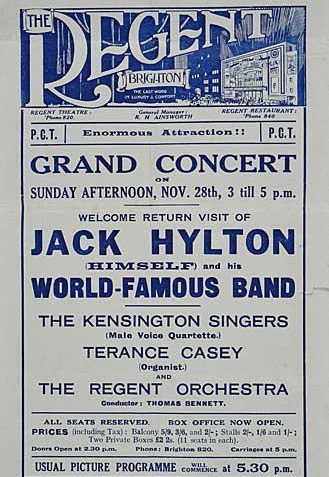 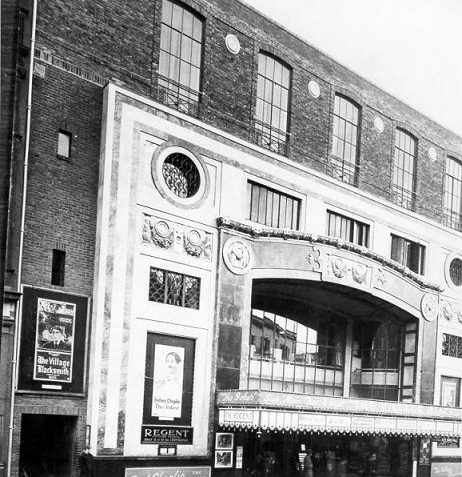 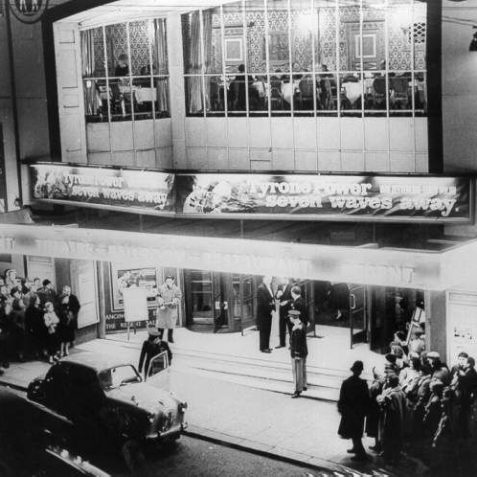 This photo shows the evening of a charity screening of Doctor at Large starring Dirk Bogarde in 1957. The regular programme at the time featured a film starring Tyrone Power. Diners can clearly be seen in the first floor restaurant.
Image reproduced with kind permission of The Royal Pavilion and Museums Brighton and Hove 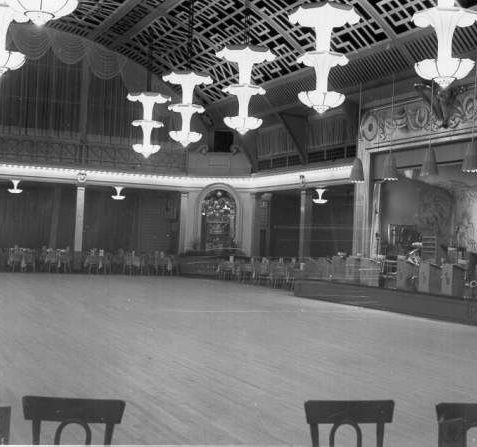 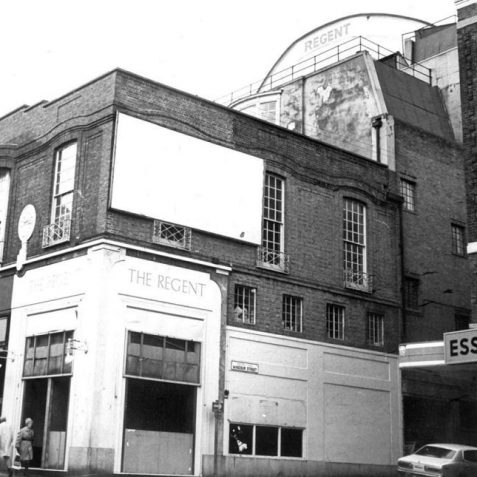 Another entrance hall was built in North Street, on the corner of Windsor Street. It was originally intended to be the main entrance for patrons of the cinema stalls.
Image reproduced with kind permission of The Royal Pavilion and Museums Brighton and Hove 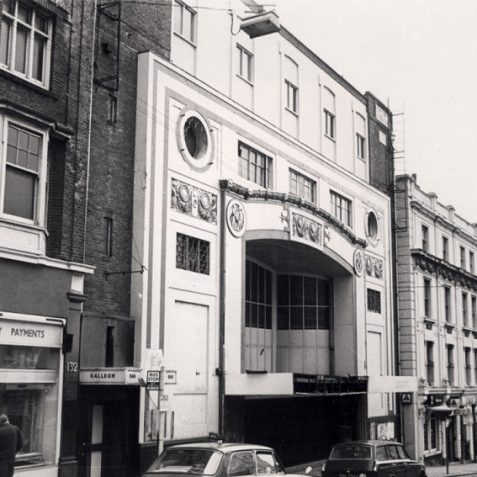 In spite of its opulence and ambition, the Regent was closed in 1973. It was demolished the following year while its owners concentrated on the new Kingswest development in West Street. The site was later used for a branch of Boot's The Chemist.
Image reproduced with kind permission of The Royal Pavilion and Museums Brighton and Hove 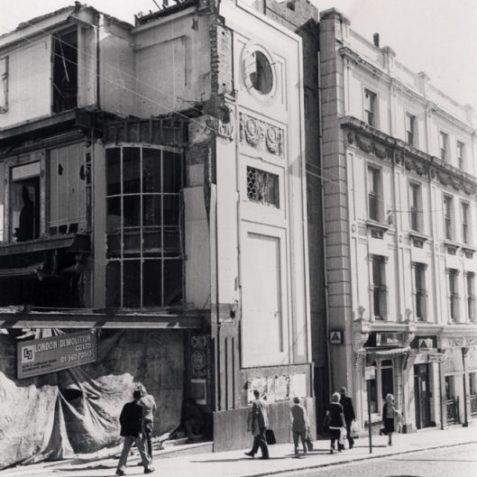 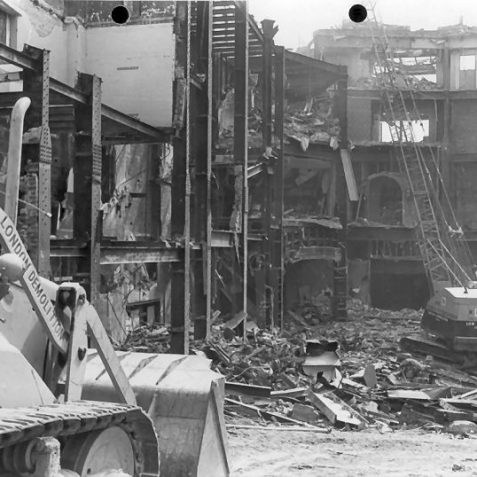 The Regent cinema in Queen’s Road opposite the clock tower, was Brighton’s grandest cinema, and regarded as Britain’s first ‘super cinema’. The site was originally acquired by Provincial Cinematograph Theatres in 1914, but work did not commence until after WWI. Robert Atkinson, the Regent’s architect, intended that the project would reflect all the most up-to-date trends in theatre design. His design which would cost almost half a million pounds, included plans for a winter garden on the roof and an underground ballroom.

In practice, excavating the site was fraught with problems relating to the slope of the land. Atkinson was forced to revise his original design. The ballroom was eventually built on the roof and the Renaissance Restaurant, over the main cinema entrance hall. The interior was lavishly decorated with detailed plaster work and elegant lighting. The decor and the name were both a clear reference to Brighton’s royal connections.

The cinema’s auditorium was entirely dominated by a huge proscenium arch which was decorated in vivid colours. The work on this feature was carried out by Lawrence Preston, Head of the Brighton School of Art. So decorative and ornate was the whole design that the Regent was generally acknowledged to be the most innovative cinema to have been built at that time. Atkinson’s design was certainly impressive; it was described as an Adamesque working of Roman classical motifs. The unusual ‘fan’ shape auditorium was in complete contrast to the design of contemporary cinemas with their rectangular auditorium and parallel walls.

On Wednesday 27th July 1921, the Regent cinema opened to the public showing the film A Yankee at the Court of King Arthur. There was also a performance by a popular baritone and orchestra, together with a recital on the orchestral organ. The glory days of Brighton’s Picture Palace were launched.

The photographs in the gallery above are reproduced courtesy of The Royal Pavilion & Museums Brighton and Hove. You can view their online collection of local photographs here