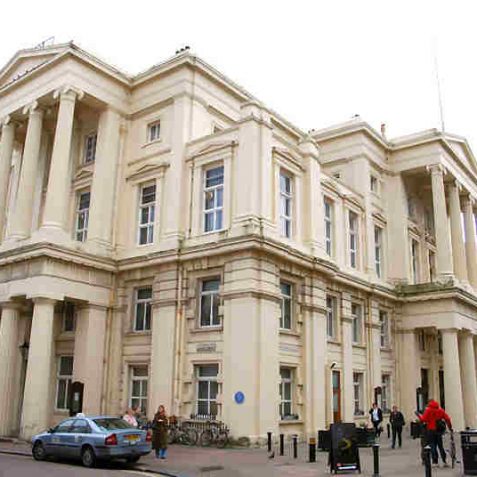 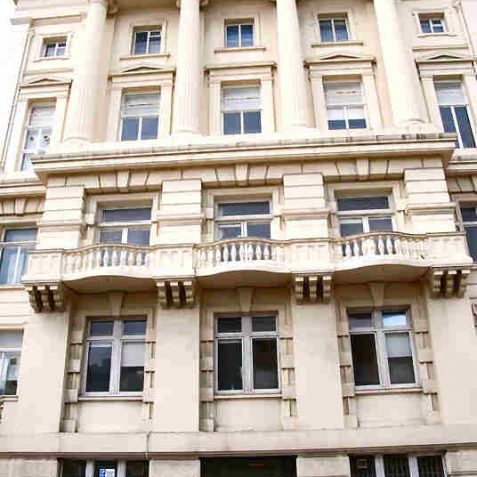 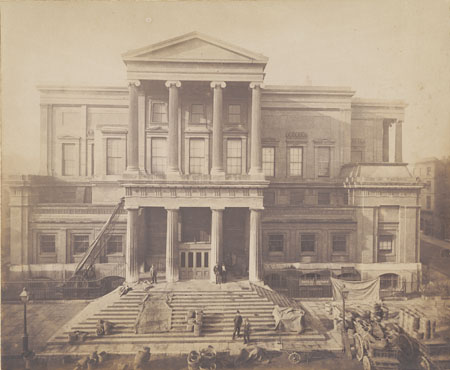 This photographic print shows the front entrance of Brighton Town Hall. A market can be seen at the foot of the steps. The ladder leading up to the balcony suggests that some construction work is taking place on the building. The town hall is a prime example of neoclassical architecture in Brighton. Designed in 1830 by one of the town commissioners, Thomas Cooper, the building was strongly influenced by classical architecture. This photograph gives a clear view of the Ionic pillars surrounding the entrance. The interior also followed a similar design, with numerous Ionic and Corinthian columns.
Reproduced courtesy of Royal Pavilion and Museums Brighton and Hove 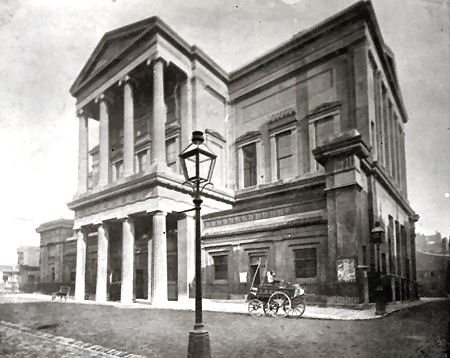 This photographic negative is a copy of an original negative. It shows Brighton Town Hall. It is a view south east of the front entrance. A gas lamp can be seen in the foreground of the image. A handcart bearing the name La Croix can also be seen in front of the town hall.
Reproduced courtesy of Royal Pavilion and Museums Brighton and Hove

A building known as the Townhouse once stood on the cliff top between Black Lion Street and Ship Street to the east of the Blockhouse. It was mentioned in the Book of Ancient Customs of 1580, and the market was held in front of it. However, the Townhouse was gradually undermined by erosion, and the building was then either demolished or allowed to decay, probably by the early eighteenth century. {1,10}
The first building to be known as the Town Hall stood on the western side of Market Street , a small, two-storey building with gables. It was erected in 1727 and was used principally as a workhouse (see “Workhouses”), but it was also used sometimes for vestry meetings and by the superintendents of the watch, forerunners of the police; it had a small cell known locally as the ‘Black Hole”. Following the removal of the workhouse to Church Hill in 1822, the building was purchased by the town commissioners and was demolished in 1823 to make way for the new market building. The site is now occupied by Bartholomew Square. {14,18,112}

a) BRIGHTON TOWN HALL, Bartholomews: The present Town Hall was built in 1830-2 by the town commissioners on the site of the former market in Bartholomews, the foundation stone being laid in April 1830 by T.R.Kemp . The building was designed in classical style by Thomas Cooper, himself a commissioner, in the form of a Greek cross but the southern wing was never erected because the necessary land could not be purchased. The interior was a also classical design of large halls, corridors, Corinthian and Ionic columns, staircases and landings. The commissioners’ debating chamber on the second floor adjoined the Great Room, which held 800 people for concerts and other performances; the central police station was also included in the new building. In 1855 the Town Hall was transferred from the now defunct commissioners to the corporation.
From late 1897 until 1899 a large reconstruction of the interior was executed at a cost of some £40,000. The Great Room was removed, the basement was converted into a larger police department, a new council chamber was provided at the southern end of the second floor, the east wing was altered considerably, and the exterior was modified by filling in the upper corners. Council meetings were held at the Royal Pavilion and petty sessions at the present public library in Church Street during the reconstruction.
The Town Hall is now a listed building of four storeys, with giant fluted Ionic columns forming porticoes above the entrances. It has proved inadequate for the purposes of modern local government, however, and municipal offices have been scattered throughout the town centre for many years. In 1936 plans were made for new offices in Market Street , and in 1958 a site to the south of Edward Street was selected. However, in 1984-7 the four-storey Bartholomew House and Priory House were erected as municipal offices around Bartholomew Square with the Hospitality Inn forming the southern facade. Ever since it was first erected the Town Hall has been criticised for being ugly and incomplete, but the opened-up vista from the civic square certainly sheds a new light on this excellent building.