You are here: HomenextPlacesnextCivic buildingsnextHospitals and DispensariesnextCare for the poor in the early 19th century

Care for the poor in the early 19th century 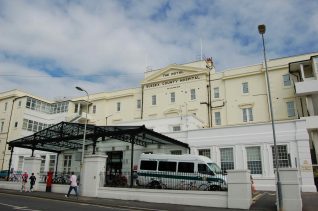 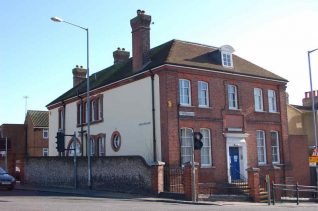 The forerunners of the town’s hospitals were the benevolent and charitable institutions, and the public dispensaries established in the early nineteenth century, mainly for the benefit of the poor. The two principal dispensaries in Brighton are described below.

a) BRIGHTON, HOVE AND PRESTON DISPENSARY, 113 Queen’s Road : Founded as the Brighthelmston Dispensary with the patronage of the Prince of Wales, this institution opened on 1 January 1810 at the eastern end of Nile Street . Advice and medicine were given free, and the sick were attended in their own homes upon the recommendation of a subscriber. In July 1811 it moved to North Street , opposite Ship Street , and was joined there by the Sussex General Infirmary in November 1812. Both establishments moved to 25 Middle Street in 1819, but the infirmary closed when the Sussex County Hospital opened in 1828.
In 1849 the dispensary moved to a new building in Queen’s Road , at the south-eastern corner with North Road . Designed by Herbert Williams in Gothic style , it was faced in knapped flint with a Dutch gable and oriel window, and continued as a dispensary until 1930 when it was converted to offices. After the Second World War , the building was used as an ex-servicemen’s hall, Churchill House, but was eventually acquired by Eagle Star Insurance before being demolished in the 1960s for the erection of new offices.
In 1859 a western branch opened at 4 Farm Road, Hove, and the name was changed to the Brighton and Hove Dispensary. The branch started to take in-patients, and in 1888 moved to Sackville Road where it became Hove Cottage Hospital in 1902 and then HoveGeneralHospital. A second branch opened in 1885 at 26 Ditchling Road, a large red-brick building at the corner of Upper Lewes Road. The dispensary became the Brighton, Hove and Preston Dispensary in 1918, and continued to function from Sackville Road and Ditchling Road until 1948 when the National Health Service was established. The Ditchling Road building then became a mass radiography unit and is still used by the health authority.
{24,83,94}

b) BRIGHTON, HOVE AND PRESTON PROVIDENT DISPENSARY, 117 Queen’s Road : Established as the Brighton Provident and Self-Supporting Dispensary to promote a spirit of independence amongst the poor, it opened in 1837 at 32 Middle Street, a few doors from the Brighthelmston Dispensary with Dr William King as physician. The dispensary was supported by voluntary contributions, and for one penny per week per person, and one halfpenny per child, it gave medical aid to those who could not obtain the services of the Brighthelmston Dispensary, although aid was given gratis when necessary. In 1878 it moved to 117 Queen’s Road, again just a few doors from the Brighton and Hove Dispensary, and continued to function with branches at 110 Springfield Road; 2 Whitehawk Avenue; 27 Rifle Butt Road; 23 Chailey Road; 2 Westbourne Street, Hove; and at 33 Elm Road, Portslade, until the National Health Service was established in 1948.
{24,83,94,100}