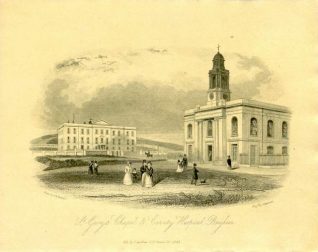 zoom
St. George's Chapel and County Hospital, 1841: Men, women and children walking in the grounds of St. George's Chapel. Behind them is the Sussex County Hospital and Sea-Bathing Infirmary, which opened on 11 June 1828 with four large and twenty-three small wards, catering for 80 patients.
Image reproduced with kind permission from Brighton and Hove in Pictures by Brighton and Hove City Council 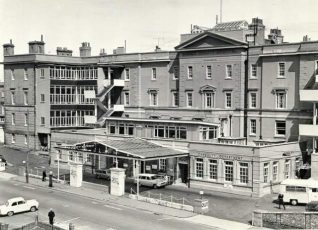 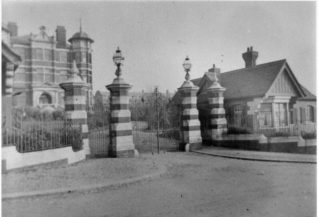 zoom
Entrance and Gatehouse at Brighton Borough Hospital, c. 1900: Bevendean Hospital originally opened in 1881 as a smallpox sanatorium. The main buildings were erected in 1898, and the institution became the Brighton Borough Hospital, specialising in treating people with tuberculosis and other infectious diseases until it was taken over by the National Health Service in 1948. It then became Bevendean Hospital, and continued to treat patients until April 1989. Most of the buildings have been demolished and a housing estate has been built on much of the site. The Sussex Beacon hospice and continuing care centre for people with HIV/AIDS is also within the former hospital grounds.
Image reproduced with kind permission from Brighton and Hove in Pictures by Brighton and Hove City Council

c) DEVELOPMENT of HOSPITALS: The Sussex General Infirmary was established in November 1812 in the North Street building of the Brighthelmston Dispensary, and continued until the opening of the town’s first hospital, the SussexCountyHospital and General Sea-Bathing Infirmary, in Eastern Road in 1828. Patients at the hospital were treated upon the recommendation of a subscriber.
Several other voluntarily-supported hospitals opened in the latter nineteenth century for specialist treatment. In 1881 Brighton Corporation opened a borough sanatorium at Bevendean Road, and converted the Elm Grove workhouse into the General Hospital (originally Brighton Municipal Hospital) from 1935. The corporation also maintained a smallpox isolation hospital from 1901 at Fulking Grange on the Downs above Fulking, and a lunatic asylum at St Francis’s Hospital, Haywards Heath, from 1858 {83,115}. However, following the 1947 Health Act, all hospitals in the area were taken over by the Ministry of Health on 5 July 1948.

The following four hospitals are no longer in existence.

d) BEVENDEAN HOSPITAL: The former Bevendean Hospital originated as a wooden sanatorium for infectious diseases. Known as the Brighton Borough Hospital, it was erected on the eastern side of Bevendean Road in 1881 during an outbreak of smallpox. The first section of the permanent borough sanatorium, a three-storey building with the borough arms on turreted corners which latterly served as the main reception and administrative block, was designed by borough engineer Francis May and opened on 27 October 1898 by the mayor, Sir John Blaker. The sanatorium entrance was flanked by two red-brick lodges. An isolation pavilion was opened at the same time to the north-west with a scarlet fever pavilion to the north; two further pavilions were added in 1903. The sanatorium operated principally as an isolation hospital for infectious diseases under municipal control until 1948 when, having been taken over by the Ministry of Health, it became Bevendean Hospital. Three years later the buildings were quarantined for thirty-four days during a famous outbreak of smallpox. A diagnostic theatre and x-ray unit were added in 1967. Latterly used for the care of psychiatric and geriatric patients as well as the treatment of infectious diseases, the 127-bed hospital was closed to in-patients on 24 April 1989 because of budget cuts, and the last day-ward shut on 26 September 1990. The buildings are said to be haunted by former patients. An AIDS hospice and housing is to be built on the site. {97,115,123}

f) SUSSEX MATERNITY HOSPITAL: Established in 1830 by Dr Lyons at 69 High Street, it was originally known as the Lying-in Institution and Dispensary for Women and Children, and gave assistance and comfort to poor women during confinement. In about 1854 it moved to 76 West Street and became the Women’s Lying-in Institution and Hospital. Other branches were opened at 9 Portland Road, Hove, and 10 Richmond Terrace, and in 1912 it became Brighton and Hove Women’s Hospital.
In 1922 the hospital moved to the former BrightonGrammar School building at 76-80 Buckingham Road where it was renamed the Sussex Maternity Hospital. The square, three-storey building was extended in about 1929, but with the transfer of maternity cases to the the new Tower Block of the Royal Sussex in 1969-70, the hospital became redundant and was acquired by the corporation for social services purposes; it was demolished in September 1976 and an East Sussex social education centre now occupies the site. There were also branches of the maternity hospital at 16 Wellington Road, and at the former clinic in Whitehawk Avenue. {6,24,83,115,123}