A history of two buildings 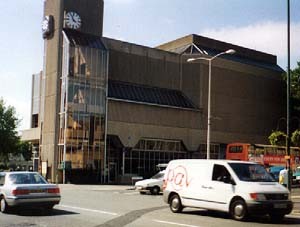 First Hove Town Hall (1882)
In 1878, Alfred Waterhouse was appointed architect of the new Town Hall. Having already designed the Natural History Museum in South Kensington (1868), and the Manchester Town Hall (1877), Waterhouse was chosen by the Commissioners without holding a competition.

(Waterhouse was also responsible for two other notable buildings in Brighton: the red brick and terracotta Metropole Hotel which opened in 1890 and the Prudential Buildings erected in North Street in 1906 and demolished in 1970.)

When the Chairman of the Hove Commissioners opened Hove Town Hall on 13 December 1882, he described Waterhouse’s buildings as ‘things of beauty and a joy for ever’. The building, which cost about £50,000, was designed in Victorian Gothic perpendicular style, with a 40 foot high Great Hall measuring 91feet x 60 feet, large enough to hold 2,000 people.

There was a 110 foot tower containing a 12-bell carillon and a clock with 4 dials (each measuring 7 feet x 6 inches) and illuminated faces. Gillet and Bland of Croydon supplied the bells which cost £1,567 and played 14 different tunes including Home Sweet Home, Men of Harlech, Auld Lang Syne, Rule Britannia, God Save the Queen and Sussex by the Sea.

Fire breaks out (1966)
In the early hours of Sunday 9th January 1966, catering contractors cleared up after a dinner and dance held by a Crawley engineering firm. A fire started, possibly in one of the rubbish bins, and the alarm was raised at about 5am by Jimmy Ferguson of Osborne Villas. The Hall Superintendent, Stanley Burtenshaw, his family and two friends were trapped by the blaze and had to be rescued from their 2nd floor flat by the Fire Brigade. Firemen carried Mr Burtenshaw, who had been overcome by smoke and was unconscious, down the ladder, but the others managed to climb down unaided.

Plans after the fire
Shortly after the fire, which had destroyed the Great Hall, the Council Chamber, offices and the Magistrates’ Court, a report by the Town Hall said that it was decided to retain as much of the fabric of the building as possible, pending decisions on its future. In the meantime, Hove’s civic administration transferred to Brooker Hall, an art gallery and museum in New Church Road.

The western part of the building, which had not been seriously damaged by the fire, became the temporary home of the magistrates’ court and court offices until they moved to the new law courts in Holland Road. This marked the end of the Hove Town Hall and this last remaining part was demolished in November 1971.

For the next couple of years there was a great deal of debate about preserving the shell of the building and redesigning the interior. Eventually, however, it was decided that a completely new Town Hall should be built and, in January 1968, the plans went on display. Planning permission was granted in October 1968.

The new Hove Town Hall (1974)
John Wells-Thorpe, of Gotch & Partners, Richmond Place, was chosen from a shortlist of six, with a tender of £1.4m; the contractors were Walter Llewellyn & Sons of Eastbourne.

Building work continued throughout 1972 in spite of a strike by UCATT members in May and flooding problems which necessitated extra 20 foot pilings, a total depth of 60 feet. The building was constructed using 900 concrete cladding units, each weighing two tons, inset with huge panes of tinted glass called ‘Spectrafloat’.

Lord Rupert Nevill opened the new Hove Town Hall on 5 March 1974. The final bill was £2,911,283, more than double the original tender. A new extension was added in 1991 to house the Registrar’s office, a Citizen’s Advice Bureau and a Tourist Information Centre.