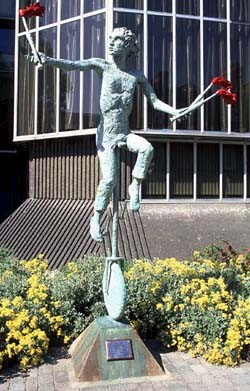 zoom
The Juggler
Image reproduced by kind permission of www.imagesbrighton.com

The juggler
The 9 foot sculpture of a juggler on a unicycle outside Hove Town Hall is by Helen Collis who died of cancer in August 1995 at the age of 57. It is a replica of a piece which won her the Sussex Arts Club prize for Visual Arts.

The ‘Dancing Girl’
Before the fire in 1966, there used to be a white marble statue called ‘Dancing Girl’ in the entrance to the first Hove Town Hall.

Although the statue was blackened by smoke in the fire, it escaped undamaged and was bought by Anthony Rea, the writer, and can now be found outside 3 Arundel Crescent.

The statue is a replica of one made for the Empress Josephine in 1805 by the sculptor Canova and was presented to Hove by Sir George Donaldson in 1918.

Standing on her pedestal in the entrance to Hove Town Hall, she witnessed an important meeting between Neville Chamberlain and British and French military leaders soon after the outbreak of the Second World War in 1939.