When it closed in 1988, Hove’s Lady Chichester Hospital, the first British hospital of its type, became the last of ten or twelve similar small hospitals that had followed in its footsteps. The Lady Chichester was the brainchild of Dr Helen Boyle. Working in London’s East End towards the end of the nineteenth century, Dr Boyle was shocked by conditions that forced patients to struggle on under great emotional stress.

Neurosis not recognised disorder
At that time, neurosis was hardly recognised by the medical profession  as a common disorder. No general hospital would accept such patients; and until such time as they had become so disturbed they were certifiable, no mental hospital would either. Dr Boyle was determined to remedy this. She visited clinics on the continent and discussed the problem with psychiatrists. Then, in 1905, she took the first step towards establishing a hospital for the treatment of nervous disorders when she opened ten beds for the treatment of in-patients at her small out-patient dispensary at 101 Roundhill Crescent in Brighton. 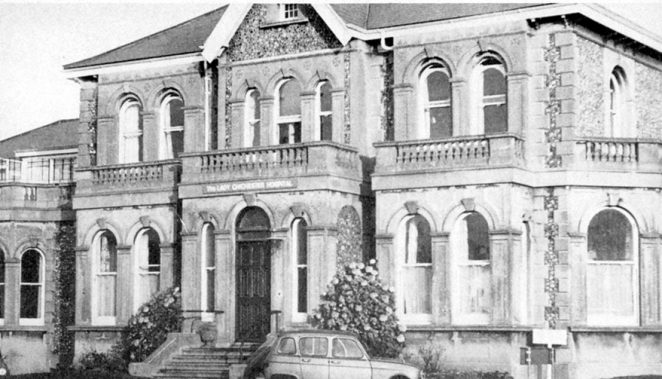 A growing need for the work
The work grew rapidly from the start. Patients came from all over the British Isles and from overseas. In 1911, a lease was taken on 70 Brunswick Place, Hove. This made it possible to take a total of 38 in-patients. In 1920  a large private house in New Church Road was purchased and became the Lady Chichester Hospital.

Strengths and weaknesses
There was a great deal that was unusual about the Lady Chichester. From the outside it resembled an elegant Hove villa; said by some to be the former summer palace of the Bishop of Aldrington .  Inside, despite attempts to adapt the building as a hospital, some of its former elegance remained. Certainly when I was invited to visit the Lady Chichester in the late 1970s to produce an article on its work for the Brighton Health Bulletin, it appeared not to be to be anything like a hospital, inside and out. But this was a source of both strength and weakness for the Lady Chichester.

Difficult working conditions
Working conditions were far from ideal and it must have been very difficult to practise modern medicine there. On the other hand, the atmosphere was so different from the one patients would expect in a traditional large mental hospital, they underwent few of the usual fears and apprehensions, if admission there was suggested. Gradually, following its opening in 1920, adjoining villas had been purchased and its facilities were extended. 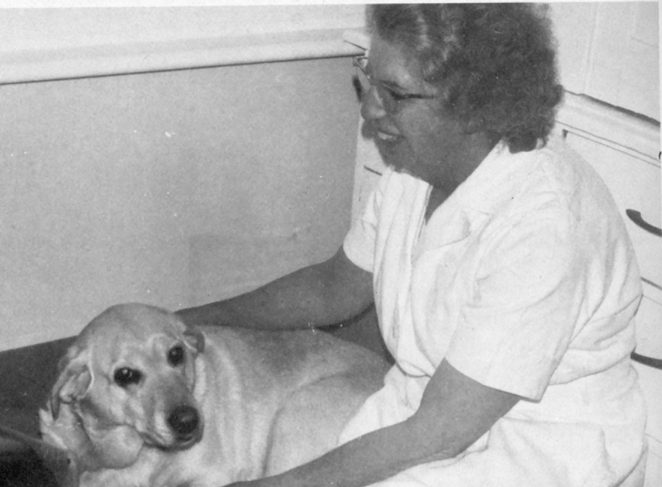 Senior physiotherapist Avis Dutton (with her guide dog Becky). Shw worked at the hospital fpr 29 years and working with a consultant pyschiatrist developed her own style of relaxation for the patients.

‘Crossing a Rubicon’
Following the introduction of the Mental Treatment Act in 1930, a liaison with the Royal Sussex County was established. Outpatients with early nervous disorders were then seen at the County while, for its part, the Lady Chichester opened six male beds in an adjoining villa. The County Hospital had the first claim on them and was responsible for their financial upkeep. The move has been described by Val Brown in Women’s Hospitals in Brighton Hove as ‘crossing a Rubicon,’ for until then, the Lady Chichester had been a hospital for only women and children.

Leading the way with therapy
The Lady Chichester was always a pioneering hospital. The main basis of treatment throughout the years was psychotherapy in a supporting environment. Auxiliary services − hydrotherapy in the early days, physiotherapy and occupational therapy − always played an important part. In the 1920s an old-patients’ club was set up – a forerunner of the therapeutic clubs that were later established. A child guidance clinic was started and later a children’s department was opened.

Maintained its pioneering spirit
The pioneering spirit was much in evidence the day I visited in 1976, a dozen years before its closure. A consultant gynaecologist was holding a menopause clinic. In the tiny physiotherapy department the blind senior physiotherapist (whose guide dog, Becky, quickly broke the ice with new patients) had developed her own style of relaxation therapy, more usually the preserve of the psychologists.  In the out-patient department, the presence of a community nurse marked another new development.

Success against the odds
The Lady Chichester was a revolutionary concept. It was conceived against a background of opposition and endured a constant struggle to survive. Eventually it became the last of the line, the final survival of British hospitals of its type. However, like many small units, there were claims that it was uneconomic to run, and in 1988 it closed it s doors to inpatients and as Aldrington House, became a day centre for psychiatric patients.