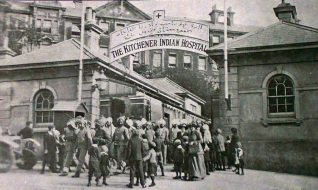 zoom
The Kitchener Indian Hospital during the First World War

Many buildings in the City were converted to accommodate wounded soldiers during the First World War. The Royal Pavilion, the Corn Exchange and the Dome were all transformed into Indian Military hospitals. The Corn Exchange ceased to be a corn market in August 1914. The Work House in Elm Grove, renamed Kitchener General Indian Hospital (photo above), now Brighton General Hospital, was converted into a 2000 bed Indian Military training hospital. York Place School was converted into a hospital specially adapted for the Indian wounded soldiers.

Other Military Hospitals in Brighton & Hove receiving wounded British and Dominion Troops were:

– No 6 Third Ave Hove: 40 beds plus an operating theatre

Over 12,000 Indian wounded soldiers were admitted to the Brighton Hospitals. If soldiers were wounded in battle and could not get back to their trench or unit on their own, they had to wait until nightfall before they could be rescued and brought out by stretcher bearers or colleagues. They were then taken to one of six hospital trains which could carry up to 400 patients at a time, each train having the facilities to carry out treatment and operations on board. These trains transported the injured soldiers to the ports of Boulogne or Le Havre where they boarded hospital ships to the south coast of England from where they went by train to Brighton Rail Station.

Crowds had gathered in the rain along the route from Brighton Railway Station to the Royal Pavilion, and they stood and cheered these brave Indian soldiers straight from the front line who had come to England’s aid in time of need. Now the people of Brighton could show their affectionate gratitude to these ‘Sons of the East’.