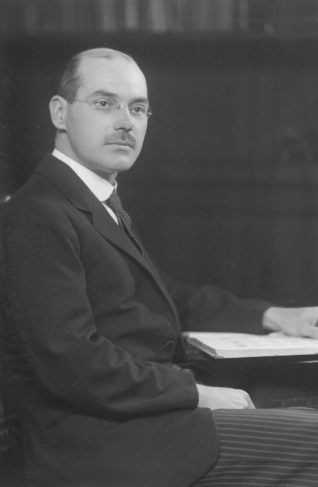 The hospital had to deal with many air raid victims during the course of the Second World War but the most unusual concerned a 20-year old naval rating, Henry Coates from HMS Vernon. He had been wounded during a hit-and-run raid by a lone Messerschmitt and admitted with what was recorded as a wounded leg.

The official account
Dr Donald Hall briefly related the ensuing ‘thrilling and unexpected episode in the hospital’s daily work with the miracle story that made the front pages of every newspa­per in the country’. Speaking at a bazaar held in the Dome and Corn Exchange in aid of the hospital, Dr Hall said,

“Among the casualties from a south coast air raid admitted to one of our surgeons was a man with an injured thigh. X-rays disclosed that embedded in the tissues was an unexploded cannon shell. What was to be done? If the shell exploded, at best the man’s thigh must be shattered and he must lose his limb – very likely his life.

If it exploded during the operation for its extrac­tion, there was a great risk to the surgeon and his assistant – almost the probability of their eyesight being injured and almost everyone in the operating theatre being wounded. The bomb disposal squad were consulted and they didn’t know what to do. They had never heard of such a case.

There was no hesitation on the part of the sur­geon or his assistant, or the anaesthetist, or the nurses. And swiftly and successfully that sur­geon of ours performed the most delicate and most dangerous operation of his career.”

The ‘tabloid’ treatment
A more colourful account headlined ‘Surgeons Risk Death taking Live Shells from Patients’ appeared in an Australian women’s magazine. This identified the surgeon dealing with ‘the delayed action time bomb’ as C.W. Beresford and the four nurses present as ‘Tall, slim theatre sister Page, blonde, buxom nurse Howard, petite brunette anaesthetist Anne Roulston and 18-year old probationer nurse Randall.’ It quoted Sister Page as saying: ‘It was just routine. There was noting heroic about it … it was a normal extraction of a bullet, of which we’ve had plenty of experience.’

Putting on a brave face
Another quote from chairman Dr Donald Hall emphasised: ‘It is the duty of the hospital to take risks to save lives, and we’re all in the front line here.’ Then, under a crosshead ‘Brave Charwoman’, the story continued: ‘Elderly grey-haired Miss Florence White, one of two sisters working at the hospital, was on duty when the patient was brought in, and even though she knew he was virtually a delayed action bomb, made him a cup of tea and held the cup while he drank it.’