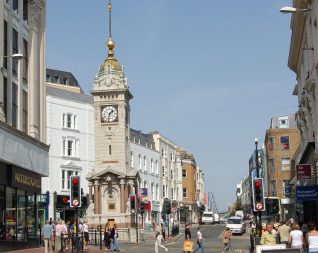 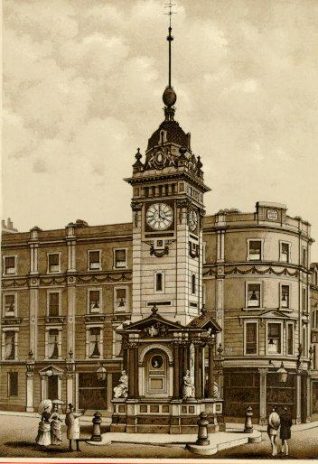 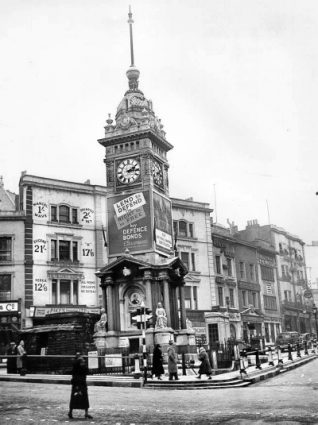 zoom
Sandbagged Clock Tower, c. 1940: The clock tower at the corner of North Street and Western Road with sandbags and advertisements for "Defence Bonds" - the slogan was "Lend to defend the right to be free".
Image reproduced with kind permission from Brighton and Hove in Pictures by Brighton and Hove City Council

Brighton’s Jubilee Clock Tower, designed by John Johnson, was built in 1888 to commemorate Queen Victoria’s golden jubilee of the previous year. The foundation stone was laid by Sir Arthur Otway on 20 January 1888, the seventieth birthday of John Willing, a local advertising contractor whose gift to the town the Clock Tower was at a cost of £2,000. Despite being described as ‘worthless’ by Sir Nikolaus Pevsner {45}, the Brighton public has retained a nostalgic affection for the Clock Tower and it remains at what is probably the hub of modern Brighton despite proposals to remove it.

The tower stands 75 feet high on a red granite base with four seated female statuettes. Above are portraits of Queen Victoria; her late husband Prince Albert; her son Edward, Prince of Wales; and his wife Princess Alexandra. They are flanked by columns and topped by pediments with four projecting hulls giving directions to Hove, the sea, Kemp Town and the station. Above the 5-foot clock faces and cupola is a 16-foot mast, at the base of which lies a gilt-copper sphere. This was a time ball, designed by Magnus Volk and controlled by land-line from Greenwich Observatory, which rose hydraulically up the mast and fell on the hour, but it functioned for a few years only after complaints about the noise. An excellent model of the Clock Tower may be found in Brighton Museum.

The following resource(s) is quoted as a general source for the information above: {3,189}