If asked, many Brightonians who can remember the Guinness Clock, give two completely disparate descriptions of the clock. This is due to the presence in Brighton of not one, but two Guinness Clocks in the 1950’s & 60’s. One was a type of travelling Heath-Robinson novelty clock and the other an advertising hoarding, containing a clock, on the seafront. 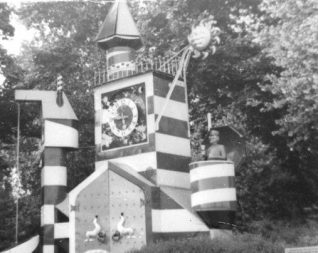 Battersea original 1951
The original Guinness novelty Clock was the brainchild of Guinness’s advertising manager, Martin Pick, as an exhibit for the Festival of Britain in 1951. It was designed by Lewitt Him & Co. and took Hatton Garden clockmakers, Baume & Co. five months to build with the clock being erected in Battersea Pleasure Gardens upon completion. The clock featured various characters and animals that had been used in Guinness’s advertising campaigns. The principle operating features were the Zoo Keeper under a rising umbrella, an opening whirligig on the top, the Mad Hatter catching fish from a pond below, the clock face and the front doors opening to reveal the Toucan Ballet around the Guinness time tree. 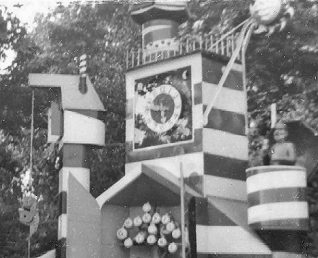 Brighton replica
So popular was the attraction that various local authorities and commercial retailers requested that they could display it. As a result two mobile facsimiles were built in 1952 and these ended up at Morecambe and Southend-on-Sea. Thereafter a further eight smaller replicas were built and it was one of these that was displayed in Brighton. A more elaborate travelling version of the clock was designed and built in 1959 and again first exhibited in Battersea Pleasure Gardens. Although the clocks had been hugely successful and will remain as enduring memories for many folk, sadly the last of them was dismantled for scrap in the mid 1960’s.