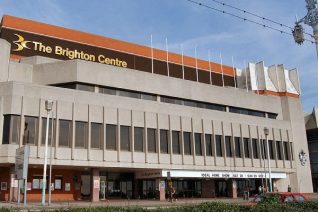 Schemes for a conference centre and winter garden on the site of Russell Street were proposed both before and after the last war, and in 1958 the area was cleared in readiness. As part of the 15-acre Churchill Square/West Street redevelopment scheme, the site of the Brighton Centre was scheduled for a public building topped by a 30-storey block of flats that would have dominated the sea-front. Fortunately the plan was ‘watered down’ and the site remained vacant while the Top Rank Centre (Kingswest) and Churchill Square phases of the redevelopment were completed. However, the need for a new conference and entertainment centre to compete with facilities offered by Blackpool was brought to a head by the Rank Organisation’s 1971 decision to refurbish the Top Rank Centre, thereby severely restricting conference accommodation in the town. The new conference centre was approved by the council in January 1972 at an estimated cost of £3 million, funded mainly by the sale of council-owned land including the Varndean Park estate to developers. Construction commenced in 1974.

The Brighton Centre, which eventually cost £9 million, was formally opened on 19 September 1977 by the Prime Minister, James Callaghan, although the first event, a folk-music festival, was held at the beginning of the month. Designed by Russell Diplock, the building was unique when it was erected although Bournemouth and Harrogate now have similar venues. The main auditorium has gallery seating for 2,100, with retractable seating for another 2,900 or an exhibition space of 1,925 square metres; a small adjacent hall, the Hewison Hall, can accommodate 800 people in 597 square metres. A banqueting suite has room for 1,200, and facilities also include 4 camera rooms, 8 interpreting rooms, and 650 telephone lines. The exterior grey fa..cs.ade is relieved by first-floor windows and upper storeys in brown brick, decorated with the borough arms and a BC motif, the overall appearance being an improvement on that of its eastern neighbour.

The Centre has been in almost continuous use since it opened, playing host to international singing stars, party-political and other conferences, exhibitions, ice shows, and major sporting events such as Brighton Bears National League basketball, the annual women’s tennis tournament, and Davis Cup tennis in March 1981. It has given the conference and exhibition trade a significant boost, stimulating the hotel improvement schemes of the 1980s, and has provided much entertainment for residents. In 1990 a scheme was commenced to provide additional exhibition space at the rear of the Centre, linked to the new Oak Hotel in West Street.

Brighton has been a major conference centre since the 1853 annual meeting of the British Association for the Advancement of Science was held at the Royal Pavilion and Town Hall {7}. The first party-political conference was held by the Conservatives in 1875, while Labour first came in 1921 and the Liberals in 1963 {123}. By 1988 the conference trade brought an estimated 350,000 delegates and visitors to the town, and £53 million, spent mainly on accommodation and food, was injected into the local economy.

The following resource(s) is quoted as a general source for the information above: {123,277}