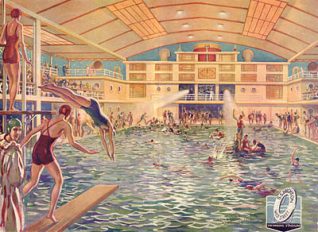 The “S.S. Brighton” as it was known locally, was built on the original site of the George Inn, situated near the bottom of West Street, Brighton. Charles II reputedly stayed at the inn overnight in October 1651, during his escape to France. A branch of oak was hung out of the upper window on every anniversary of his stay thereafter. The inn later changed its name to the Kings Head. It was rebuilt in the twentieth century, but was demolished in the early part of 1933.

The “S.S. Brighton”, a contraction of “Swimming Stadium Brighton”, was opened on the 29th of June 1934. It was built by W. Hayward & Sons (Bournemouth) Ltd and billed as the largest covered seawater swimming pool in the world. One of the first swimmers to dive from the 10 metre diving stage was Johnny Weismuller, the Olympic World Champion, who went on to Hollywood film fame as “Tarzan”.

From seawater pool to ice rink
Unfortunately, after its initial success, the popularity of the “S.S. Brighton” as a swimming pool began to decline. Due to the very hot summers of 1934 and 1935, local people and visitors to the town seemed to prefer the sea or open air baths. The management decided to turn the pool into an ice rink, though only on a temporary basis. The heyday of the “S.S. Brighton” as the largest covered swimming pool in the world was over. On the 29th of September it closed its doors to the public, just fifteen months after it had opened. Whilst this was the end the pool, it was not the end of the S.S. Brighton.

Seventeen days later, on the 16th of October 1935, the swimming pool was reborn as the “Sports Stadium”. The new ice rink was an instant success with the people of Brighton and dominated the south coast as the top entertainment venue for the next thirty years.

Ice hockey and ice spectaculars
The “Brighton Tigers” Ice Hockey Team was formed in October, 1935 and was an immediate success with the locals. The Tigers, clad in their familiar black and yellow kit, continued to pack the crowds into the rink right up until the beginning of World War II. In the team’s thirty-year history, they won every trophy there was to win in the world of ice hockey.

Whilst ice hockey provided a substantial income for the rink, its financial future was secured by the first ice spectacular staged in 1936. “Marina” was the brainchild of Claude Langdon, then managing director, and Denis Mitchell, the general manager. This new ice spectacular was an instant success and caught the imagination of the public. This was to prove the beginning of the rink’s fame as the top ice show venue outside of London.

Benny Lee: the best-dressed man in town
The post war years saw some of the best ice shows ever at the rink. They were produced by the famous impresario Tom Arnold, under the watchful eye of his co-producer Gerald Palmer. The front of house was presided over by the managing director Benny Lee who took over the role in 1951. Ever present to greet the stars, he was the epitome of the best-dressed man in town and was rarely seen without his trademark – a large Havana cigar.

Benny Lee was probably the finest spokesman for entertainment the town will ever see. His final comment on the demolition in 1965 was – “the day the council demolished the S.S. Brighton, they tore the sporting heart out of the town”.