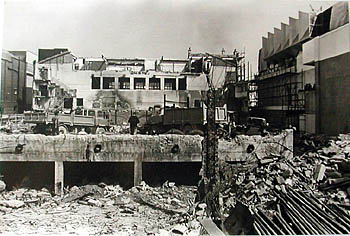 Demolition of the Sports Stadium West Street, Brighton. This view shows the Sports Stadium facing east and in clear view is the Art Deco section of the building which was the last part to be demolished. To the right of the photo the "Kingswest" complex is nearing completion. On the left side of the photo you can see the edge of the Odeon Cinema.
From the private collection of Trevor Chepstow 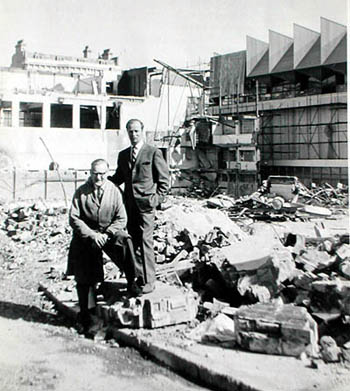 Rear view of the Sports Stadium demolition in 1965. This photo shows George Miller and Len at the back of the Sports Stadium in Little Russell Street in the final stages of its demolition.Len ran a small engineering business in Little Russell St and was well known by everyone at the rink for skills at honing ice skates to the precise level required to grip the ice. Many of the stars appearing at the rink took their skates there personally to have them sharpened and particularly the "Brighton Tigers Ice Hockey team" who were amongst his regular customers.
Photo from the private collection of Trevor Chepstow 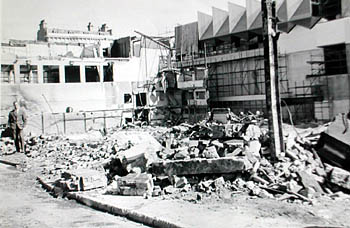 Rear view of the demolition of the Sports Stadium, 1965. This photo shows George Miller on the site of the Sports stadium in its last days of demolition in 1965. The view shows the Stadium facing east and virtually all that remains of the rink is the "Art Deco" facade facing onto West Street. To the right can be seen the finalisation of the Top Rank "Kingswest" complex. George Miller was one of the big skating stars at the ice rink and appeared in many of the ice-skating spectaculars produced by Tom Arnold. His working life began at the Hippodrome in Middle Street as a young lad where he worked as an assistant for the famous Brighton comedian Max Miller (no relation). With his first pay packet of 14/6 he bought a pair of second hand skates and began his career in the world of ice-skating. In his long career George Miller has taught many famous people to skate including Charlie Chaplin's children and a long list of celebrities from the world of stage, screen and television. Still working long into his retirement George remains active in the entertainment world.
Photo from the private collection of Trevor Chepstow 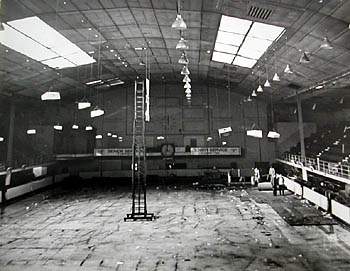 Sports Stadium Interior. This is the only known photograph of the Sports Stadium interior the day after its closure in October 1965. The previous week had seen the Conservative Party hold their annual conference at the rink.The remaining rink staff can be seen dismantling the huge floodlights from the high roof in preparation for the demolition of the rink. The ice is still there under the floor covering and eventually has to be drained by cutting large channels in the ice to allow it to melt. The next task would be to dismantle miles of copper piping used to freeze the saline solution used for the ice rink. Under the copper piping still remains the original scaffolding and floor that was built over thirty years ago in 1935, when the Swimming Stadium was turned into an ice rink. Under this remains the original swimming pool with portholes (see other images of the demolition under West St) and remains virtually unscathed! The final stage of the demolition was completed in the January of 1966, the "Art Deco" front being the last part of the building to go.
Photo from the private collection of Trevor Chepstow 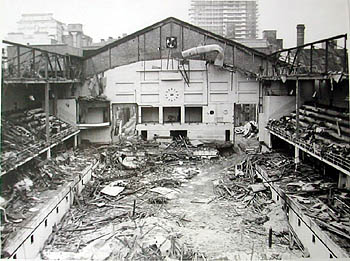 This photograph shows the demolition of the Sports Stadium West Street in the latter part of 1965/6. The view looking west shows Sussex Heights clearly in the background and to the far left is the Metropole Hotel. The old swimming pool installed in 1934 is quite clearly visible and so are the portholes around the inside of the pool. The Swimming Stadium was transformed into an ice rink in the October of 1935. Ironically thirty years later when the workmen were tearing up the floor, the original scaffolding had not moved an inch. Considering it was only put up as a temporary measure in 1935, it showed the workmen had done an excellent job initially in securing the scaffolding.
Photo from the private collection of Trevor Chepstow