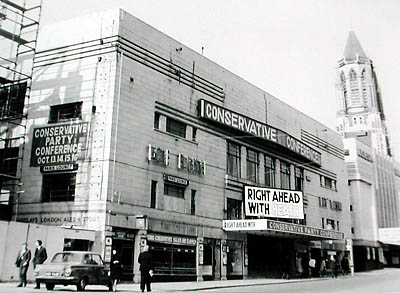 This view of the Sports Stadium was taken in October 1965 and shows the dates for the Conservative Party annual conference being held at the stadium. Next to the SS Brighton is the Odeon cinema opened in 1937 with 1,350 seats with prices ranging from 1s 9d-4s 6d for a continuous performance. The cinema closed in 1973 and the building stood unused until demolished in 1990.
From the private collection of Trevor Chepstow 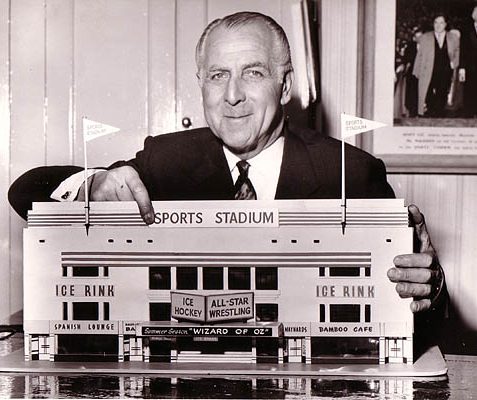 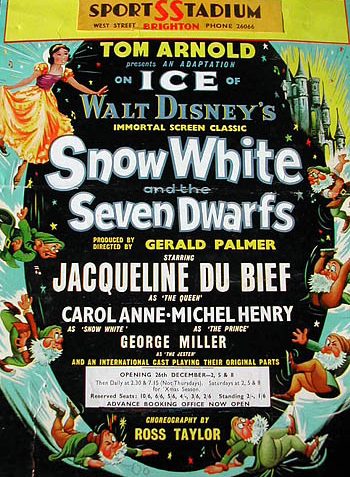 Poster advertising the forthcoming Ice Spectacular "Snow White and the Seven Dwarfs". Jacqueline Du Bief (Olympic ice skating champion) was the star of the show and also features the local star George Miller. The seven dwarfs featured in the show were well known in the ice skating world and many went on to film and TV fame. The famous impresario Tom Arnold produced the show.
Poster scanned from the private collection of Trevor Chepstow 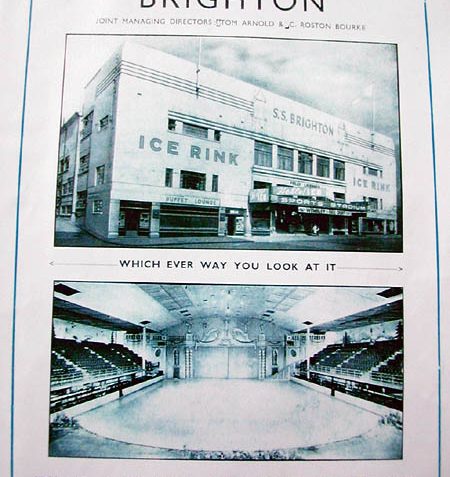 This post war photograph shows the interior of the stadium in preparation for the ice show "Hot Ice" starring Armand Perrin and Olive Robinson. The show's producer was the famous impresario Tom Arnold who produced most of the ice spectaculars in the 40's and 50's.
Photo scanned from the private collection of Trevor Chepstow 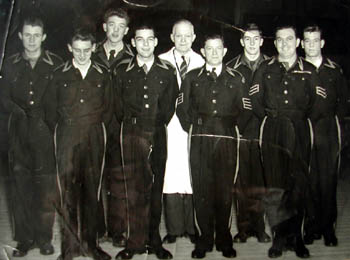 This photograph shows members of the Sports Stadium staff in the early 1950's. Many of the staff in the photo remained in Brighton after the closure of the rink in 1965 and relations may recognise some of the faces in the photo. Left to Right: Mickey Read. Ray Rigby. Ron Richardson. Roy Dummet. Ernie (in white coat). Harry Evans (Foreman). Dennis Beard. Arthur Woodjets. Tony Bass.
Photo scanned from the private collection of Trevor Chepstow 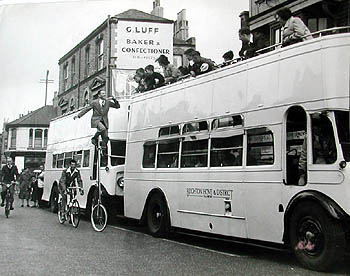 This photograph shows the famous Australian trick cyclist, Banner Forbut, promoting Tom Arnold's 1953 Ice Circus where he was appearing as a speciality act at the Sports Stadium in West Street, Brighton. This photograph was taken in Hove and shows the open decked buses belong to the Brighton & Hove District Bus Company. The cream open top buses were a regular sight on Brighton seafront in the summer months. In the background is the sign for G. Luff, baker and confectioner, this may give a better idea of the exact location of where this photograph was taken in Hove.
From the private collection of Trevor Chepstow